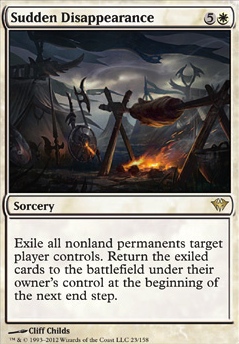 Exile all nonland permanents target player controls. Return the exiled cards to the battlefield under their owner's control at the beginning of the next end step.

This is so awesome. I love Uba Mask in this deck. I'm not sure if Bell Borca also sees cards that were exiled with him on board, but if so, Descend upon the Sinful might be a great board wipe here. Also, how about Sudden Disappearance?

A pilgrimage through planes

Sundial Update: Sundial of the Infinite felt the card was dead 80% of the time and all it did was draw out hate if it was in play and I never really wanted to play out Sudden Disappearance when i had it. Feel they might be a little clunky,

Oblivion Ring (this is reaaal nice with blink, read up on how the triggers can stack!!)

Awesome that you've gotten some play testing in! I thought this was all just in preparation for putting it together but actually playing it is probably way more valuable than the input I could give just by looking; if your testing shows something to be better than I expect, well, then it is. I'm surprised Helm of the Host isn't getting removed, but since it's not, you definitely should keep it!

As far as Lumbering Battlement goes, it's pretty meta-dependent I guess. I don't like big creatures that don't do much else because I find they rarely connect. Lumbering Battlement in particular doesn't have trample or flying or anything so it can be blocked for days, and doesn't defend well against fliers or token armies. However, if those aren't problems with your play group, then it becomes a lot stronger. Also, I completely failed to account for the "board wipe protection" aspect of it, which is synergistic - although personally I think I'd rather another card like Unbreakable Formation instead. Side note, I'd also try to play Sudden Disappearance more like a win con by clearing an opponent's board when someone doesn't expect it. Because it's a sorcery it won't save you if somebody else tries to take out your creatures, and six mana makes it difficult to combo with your own board wipes.

I misread Angelheart Vial completely, I thought you only got one counter per attack and not per damage. That definitely makes it way better, especially since life gain might make people want to attack you even more. Even so, it is a pretty heavy mana investment and I would take a look at some alternatives. In my dragon deck, which has a pretty high curve too, I like having a ton of ramp and less card draw, because once I start dropping dragons it takes a long time before I can play more than one per turn. As a result, it takes me a while to empty my hand. I would suspect your angel deck might be similar, so you might want to consider trying that out.

If anybody you play with uses extra turn spells, definitely play it, just because it's awesome to steal extra turns. If you don't, then I'd advise against it, because it doesn't do anything until it dies. When other players are playing five drops like Lord Windgrace or Nekusar, the Mindrazer , your card does nothing when it hits the battlefield. Personally I'd prefer to do something more impactful right away.

Now that you have a couple tutors, you might want to play Mistveil Plains . Also, if I were in mono white I would definitely play Emeria, The Sky Ruin , because when else would I get the opportunity for free creature recursion on a land?

Yeah together we have both progressed our decks extremely far! Ironically he is running a black deck, and he has also finally taken full advantage of sacrifices, card/card removal, life gain drain and now so how Eldrazi.

After recently play testing my deck a couple times I completely agree with you about Archangel's Light. It doesn't make sense for me because I'm always "praying" for the next big bomb or the right card on my card draw. The sideboard for me at the moment is basically cards I can't decide if I should add or not but still consider to be an extremely good for this deck. Hence why I'm here for advice!

So the thing about Lumbering Battlement is I consider it to be a protection card from me. I use it like I would use Faith's Reward or Sudden Disappearance , expect if no one tries to attack me after that then I get a free swing in before board wiping and yet simultaneously getting all my creatures back. Helm of host I have mixed feeling on that because it has actually won games for me. Depending on who I equip it to, like Lyra Dawnbringer which just makes all angels stronger for every time it creates a token or Exquisite Archangel I can sacrifice a token instead of the original angel, Angelic Skirmisher for the first strike and vigilance, Aegis Angel granting all angels close to indestructible or even artifacts, Angel of Serenity can basically exile my whole graveyard or opponents field. I see your point about it being a nine cost but in tell my friends get smart about trying to destroy it might as well keep it. Angelheart Vial Single handily made me win game but I agree it will also go in exchange for Pristine Talisman . I will defiantly try out Mana Tithe again sadly I just haven't used in game but I'm sure you are not wrong about its use!

Thank you heyzeus_ for fallowing my updates! Your support has really helped me shaped this deck into what it is today! I got my first copy on this deck so it's made me extremely happy and proud, just can't believe how much I've put into this deck though... but it has been worth it and of course I will continue to make it better. What are your thoughts on Ugin's Nexus considering I board-wipe and get ride of artifacts.