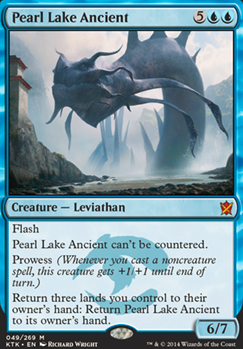 Koma and snakes
by LilMissWiz

Under The Sea
by Lebro

I noticed you had Prophet of Kruphix in your future section. Unfortunately, that card is banned in commander. Of course, if you are playing with friends in your own play group, you don't have to mind the ban list lol. If you want another big flashy fish boi, Pearl Lake Ancient is a pretty good one. Also, I feel like a deck like this could use more ramp, such as Explore or Explosive Vegetation or anything you prefer. Finally, some more all around great cards in green are Genesis Wave , Primal Command and Lurking Predators as well as Finale of Devastation , and The Great Henge if you aren't too concerned about a budget.

Let's See what isn't Written shall we?

some girthy blue bois include Nezahal, Primal Tide, Pearl Lake Ancient, or Tromokratis but these arent as good as eldrazis