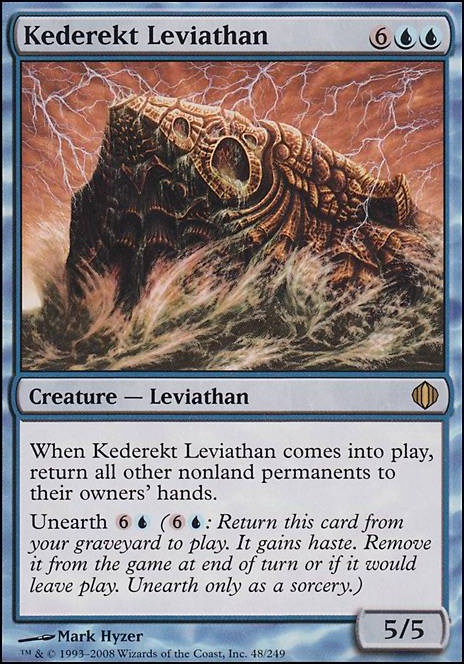 When Kederekt Leviathan enters the battlefield, return all other nonland permanents to their owners' hands.

Unearth (6)(Blue) ((6)(Blue): Return this card from your graveyard to play. It gains haste. Remove it from the game at end of turn or if it would leave play. Unearth only as a sorcery.)

Dalia self mill
by ComicSanstorm 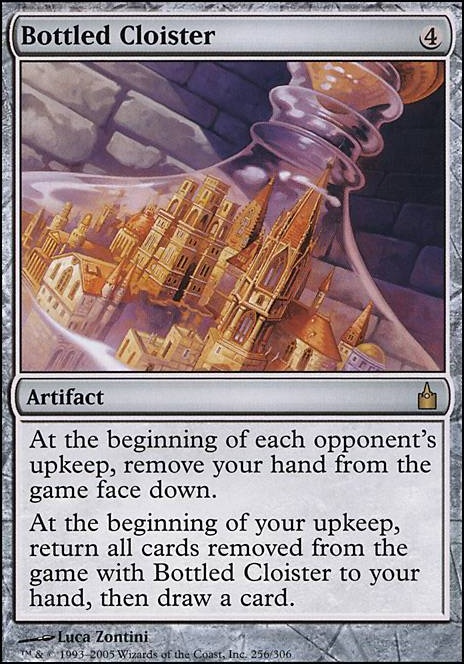 Hey, looks good, nice cuts. Striped Riverwinder is a good add, I added it too since it's a fast way to setup Runo. I also added Waker of Waves as another 6 CMC + creature who can discard itself to setup Runo.

For some possible cuts how has Flood of Tears been? I just don't like mass bounce spells that will bounce Krothuss (have to transform Runo again) as well as all the tokens he's made. Kederekt Leviathan is a sea monster who does this. Why bounce your own stuff when you have ways to only bounce opponents?

Millikin is subpar and self-mill is less good with Dimir then say Sultai where you have green to recur any card you mill. Looting is more powerful because you draw and have control over what card(s) you discard. Lightning Greaves's has limited interaction since because of shroud it can't be a haste source for attacking creature who Krothuss wants to copy.

Thank you for your feedback, I really appreciate it! So far I like the seamonsters a lot although they are kinda on the more casual side of decks due to their high cmc. They surely can pack a punch, but some of them are just mediocre for sure.

I totally agree on the Kederekt Leviathan. It first it looked cool due to his ability to reanimate himself but he's kind of a nonbo with Krothuss and felt awkward when in hand nearly every time. I wanted to switch him vor Deep-Sea Kraken, which I unfortunately didn't have at the time I started building. Nadir Kraken was mainly included because of flavor reasons I have to admit and is one of the first things I consider for further cuts! Who knows, if I feel the deck lacks power, I might drop the bigger part of the seamonstres and try some goodstuff instead, which is the stronger route imho but feels way less cool :D

The Vile Entomber is a pretty neat suggestion! I will definitely give him a shot.

Hey, thanks for the upvote at my Krothuss deck :)

How are you liking the heavy sea monster theme? Heartless Summoning is really neat tech. I started with this kind of theme, but switched quickly because I found that Spawning, Hullbreaker, Winder and Yawning are far away better than all other 6 CMC plus sea monsters. Playing others felt not needed compared to lots of other cards I could be playing, essentially more support.

Since you're playing lots of high CMC creatures consider expanding on enablers for reanimation?

Obsessive Stitcher is first a looter then it can reanimate at instant speed which is important to be able to attack with the creature you reanimate for attacking Krothuss to copy. Stitcher and Entomber both survive Heartless. Vile Entomber is a creature who Krothuss can copy. It's deathtouch lets it basically freely attack and having a repeatable Entomb effect is very good for reanimation and Wonder. The first time it attacks to be copied simply get Wonder while in combat.

Now that there's Hullbreaker combo I don't think Kederekt Leviathan is needed since it wrecks you too. Bouncing Krothuss and all tokens seems counter productive when there's many other effects to tap down or bounce permanents that only affect opponents.

Obsessive Stitcher can do more for Runo as well as Krothuss then Nadir Kraken. Nadir is fine because it's a Kraken, but do you really need it's effects? Creating 1/1 Tentacle tokens doesn't seem that good and has negative interaction with Heartless. If Tentacles triggered Spawning then that's a reason to play Nadir, but they don't. I also don't like that any counters that are on Nadir aren't copied when Krothuss makes token copies of Nadir.

I'm a long-time Mimeo player and this is the first time I'm seeing Kederekt Leviathan . That's plain nasty. Love it.

I see you're reanimating either with your companion or animate dead and dance of the dead, all 3 of them go pretty well with Kederekt Leviathan specially the auras, either of them works like a cheap boardwipe with the leviathan. I highly recommend you to test it. It also helps you bounce Gyruda, Doom of Depths