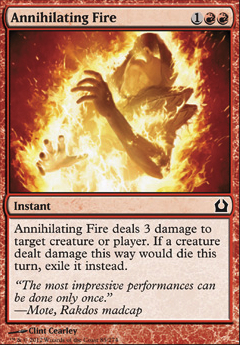 Annihilating Fire deals 3 damage to target creature or player. If a creature dealt damage this way would die this turn, exile it instead.

The Izzet Guild
by DeMoNiCcRuShEr2 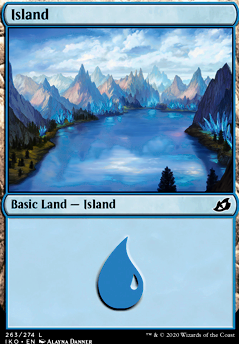 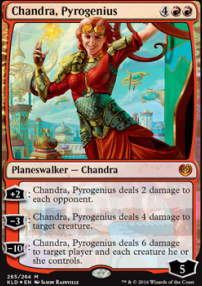 Kogarashi on Interactions: Clutch of the Undercity:

Compare Clutch of the Undercity to Annihilating Fire .

Damage causes loss of life, but loss of life is not always caused by damage. It will specifically say "damage" if it means damage. Pain Magnification will not trigger from Clutch of the Undercity .

Care if I take a jab at balancing that Zurgo? Seems like a fun challenge. Changing the name ever so slightly, to fit his persona a bit better.

Zurgo, Who Grins at Ruin

Whenever Zurgo, Who Grins at Ruin deals combat damage to an opponent, that opponent exiles a card and loses 3 life unless they exiled a land.

"Your politics bore me. Your demeanor is that of a pouting child. Return to me again empty handed, and I will bathe the landscape in your blood." - Zurgo

So, the first thing you may be asking is "Where is white represented in this card??"

In the exile effect. Yes, red can exile. See Anger of the Gods and Annihilating Fire as examples. But white is revered for it.

But exiling a card on combat damage? That's a bit extreme, right?

No. Consider what's at stake here. Do you want to:

Even if you kill Zurgo, he's your Commander. He'll be right back, swinging in immediately again. And that's where white secretly shines here. He works in a tempo deck. You churn out tokens, you bring out hard-to-kill creatures, you apply pressure of a slowly encroaching and expanding boardstate, and you overrun opponents in near-endless swaths of rampaging assaults with little to no regard to who or what you leave in your wake. - The true spirit of Mardu!

Now let's talk that Power / Toughness, shall we?

Well, here's the thing. With Zurgo Helmsmasher you are paying for essentially a 7-point Lightning Bolt. Think about it, he has Haste and MUST attack each turn. When he does, since he can only attack during your turn, he ALSO gains Indestructible. His 2 toughness might as well be 1 for all practical purposes. He's also going to grow bigger and badder, crushing everything under his rage.

You are paying for a creature who defends and empowers himself. Lower toughness and higher power is essential here.

But in this version, you are paying for a creature who actively oppresses opponents unless they are willing to submit. This means he must be able to protect himself under the retaliation of blockers. So a high toughness is key. Meanwhile, any damage he deals is lethal damage, so just 1 point is enough to kill literally anything.

He's not a 2/7 as that extra 1 point to Power means he can bypass a single instant of First Strike, should someone feel savvy enough to attempt a go-around.

And if you are concerned with him dying to two high-leveled chump blockers, recall you are running Rakdos within the Mardu sphere. Red and black removal are plentiful in Mardu. So if you are blocked by a 6/6 and a 4/4, just Terminate the 6/6 in response.

This version forces you to think a bit more strategically, but also offers the oppression that Mardu players love to employ. :D

If you don't have the cards other people recommended above, a small improvement I would recommend is to replace 1x Annihilating Fire and 2x Impeccable Timing with 3x Searing Spear (same as Lightning Strike).You really shouldn't be using white's "deal damage to attacking/blocking creature" when you have better and more direct options in red.

acbooster on Can you kill Gideon with ...

Remember to link all cards in your question with double square brackets.

Damage marked does not affect the toughness of a creature unless the source of the damage has wither (Kulrath Knight) or Infect (Glistener Elf). You can still use -X/-X effects to kill indestructible creatures, but damage won't weaken them in the slightest. It's also worth noting that all Gideons, when animated, have all damage dealt to them prevented so they can never have damage marked on them in the first place. Sarkhan, the Dragonspeaker, however, is just indestructible and can still be dealt damage.

This can become relevant if a source of damage has an extra part to it like Annihilating Fire. If you were to cast that targeting an animated Sarkhan, the Dragonspeaker and then killed him later that turn with, say, Toxic Deluge, then he'd be exiled since he was dealt damage by Annihilating Fire.

If Master of Cruelties gets through than just Annihilating Fire them

It Only Hurts If You Allow It To Hurt

GeminiSpartanX Thanks for the suggestions, I do think Lightning Bolt is a better choice over Annihilating Fire. Also I think I'll replace the Barter in Blood for 2x Anger of the Gods to get the exile effect. I personally see Dreadbore being more useful than Terminate even as a sorcery, they both cost the same and one gets rid of pesky planeswalkers. I like having Tribute to Hunger as means to get rid of indestructible creatures that help me stabilize my life total, though I could cut 2x Sever the Bloodline for 2x Go for the Throat and place the additional in the sideboard.