Whenever you cast an instant or sorcery spell, create a 1/1 red Elemental token.

Young Pyromancer occurrence in decks from the last year

Young Pyromancer's Party of One
by brokendwarf 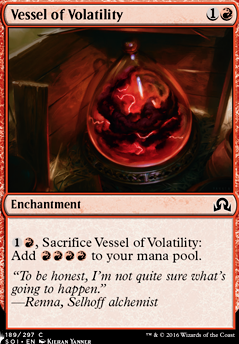 Young Pyromancer and get some more non-creatures could be some fun shenanigans as well.

Interesting, was working on deck similar to this myself. No Dreadhorde Arcanist or Young Pyromancer? There's insane combos and good value versatility with them. Not convinced about Siege-Gang Commander as it's a slow to get going, Young Pyromancer is very similar and would allow you to get token creatures off early.

Nice idea, but you can't play two Ral's at the Deck. at least, you can, but you can't have both on the board because they both have the same subtype "Planeswalker-Ral".

I don't understand, why all world will use Young Pyromancer. It dies very easy (yes, i know, that we will not attack with him, but there are enough (-1/-1 effects and make on or 2 damage)

On the other Hand i miss Kykar, Wind's Fury and try to go with it more to flying attackers. Try to clear the ground with your mass-removal, that doesen't affect your flyers.

I'm not sure, if it's a good solution to play Commit/Memory because it helps you're opponents at least a much. Yes, you get 14 cards. But mostly your graveyard should be have nothing interisting at it. Sorceries and Instant should be exiled thanks to their Flashback, Aftermath and jumpstart abilities. Can get some creatures back and maybe some of you're enchantments....it is worth?

I miss some things like Mizzix's Mastery and Windfall.

Try to replace your Talisman with some from the newer cards, like Arcane Signet, which doesn't deals damage to me.
There are many other, like Azorius Signet or Fellwar Stone

I see that you too are a man of culture. Might I suggest some Young Pyromancer main board. Its a super powerful threat in a deck like this and can often single-handedly stop aggo decks and force sweepers from control decks. Plus theyre less than a dollar a piece and very available seeing as they've always been printed at uncommon

And that is just from the first 4 pages on Scryfall, when set to price.

There are way too many broken cards in this format.