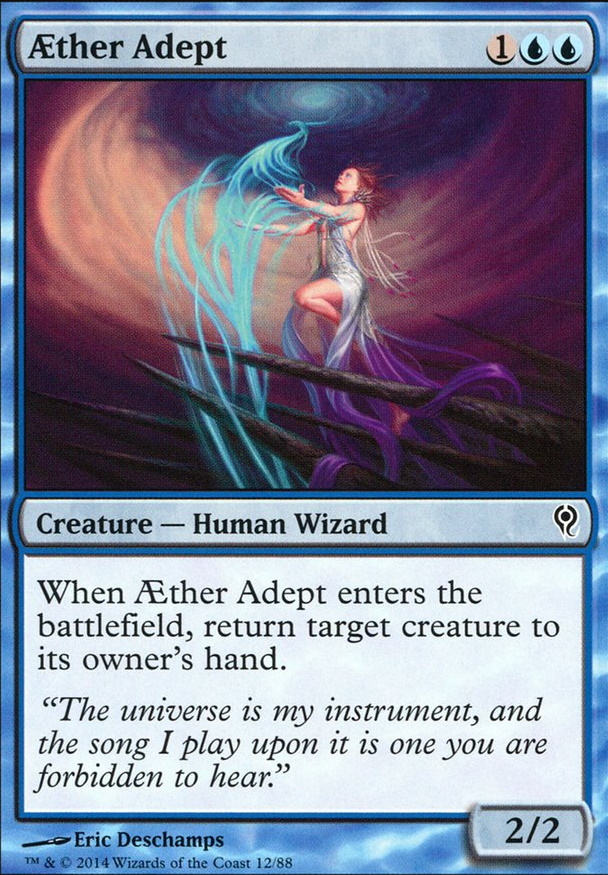 When AEther Adept enters the battlefield, return target creature to its owner's hand.

A cool thing about this partner pair is that if Sakashima copies Kodama, you can replay a creature like AEthersnipe endlessly by bouncing itself to hand and alternating between the general's triggers to replay it (bypassing the "if it wasn't put onto the battlefield with this ability" restriction since it was the other general's ability that replayed it). In this example, you would also put all permanents costing 6 or less from your hand into play using the other kodama trigger. Toss in something like Garruk's Packleader and you'll be drawing and playing your entire deck.

You might like these too: Elemental Bond, Garruk's Uprising, Soul of the Harvest, Angler Drake, AEther Adept, Man-o'-War, Mist Raven, Separatist Voidmage, Aven Surveyor, Kiri-Onna, Voidwielder, Hoverguard Sweepers, Altar of the Brood, Galecaster Colossus (in the above-mentioned combo, tap a bounce wizard before returning itself. this way the colossus can bounce all your opps' nonland permanents)

AEther Adept is good, tho it's usually worst than Venser and Barrin.
Champion of Wits is pretty good and can certainly work in place of Gurmag Drowner, but even tho you have to sacrifice two creatures to double his ability with Naban, i really like how many cards deep you get to dig with the Drowner.

Gurmag Drowner is an intersting inclusion. How has it been so far?

What are your thoughts on AEther Adept or Champion of Wits in this list? I didn't have a copy of Gurmag Drowner so I have been trying these in its place.

Leyline of Anticipation is good with counters, so you can have open Mana all the time and you just use thassa on your current board, but it is about preference for sure.

Gilded Drake is really good here, because you use thassa on creatures like AEther Adept to return Drake to your hand.