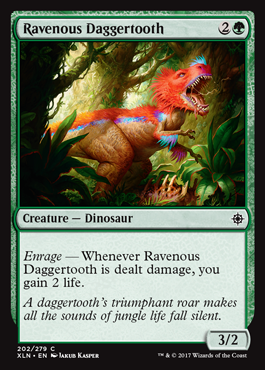 Enrage - Whenever Ravenous Daggertooth is dealt damage, you gain 2 life. 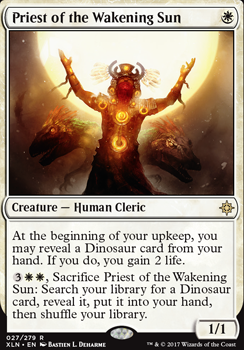 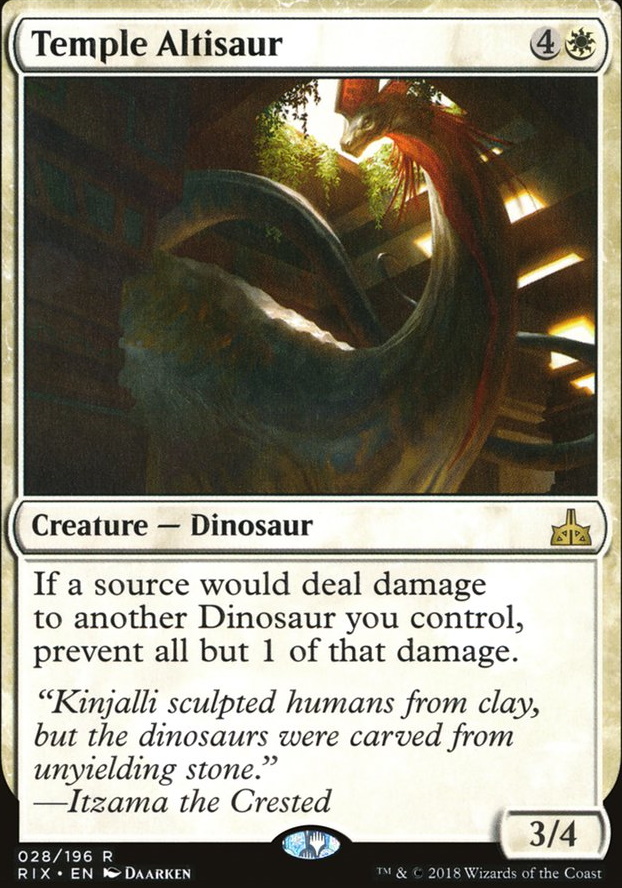 Hello, Like the deck and giving it a +1 for Pyrohemia and dinos!

In your description your combo is not infinite actually. You need to add in your Drover of the Mighty for it to be an infinite combo. And your Ravenous Daggertooth does not need to be listed in the chain since it does nothing to help it go infinite. It does let you survive the combo when it does go infinite, however, so it should still get honorable mention.

I am sure this is a fun deck to play.

True that. For the best decks, you gotta pony up. Oh, the eternal struggle of a magic player.

I took a look at all the Green/White creatures in Standard atm, and this is the list of creatures I would consider for a Dinosaur deck in these colors:

I would consider maybe focusing on the lower CMC Dinos to populate the majority of the deck and have Wakening Sun's Avatar as a finisher. Your curve is a little wonky, and you'll want to smooth it out a tad.

Hey, I'm that guy who was building that wizards control deck. I thought you might be a fellow combo player when I saw your suggestions, glad to see I wasn't wrong.

Aside from any sort of discussion of the deck, the combo you describe here actually doesn't kill ALL of the resulting tokens. Assuming you let Forerunner of the Empire trigger at least three times or more, you will end up with three tokens per Raptor Hatchling, although I unfortunately must also inform you that you do not get infinite tokens with two Raptor Hatchlings. However, you can do better! Polyraptor can make infinite tokens, since the dinosaurs will grow exponentially instead of linearly, and so every generation will be bigger then the last. This means that even if one generation dies out, the next will be bigger and will create a bigger one yet after it. If an 8 mana dino is a little much for your taste, you can also gain infinite life with Ravenous Daggertooth. Finally, I recommend Growing Rites of Itlimoc  Flip as a good way to use the wide board you will end up creating.