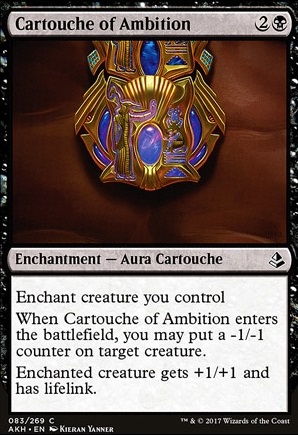 When Cartouche of Ambition enters the battlefield, you may put a -1/-1 counter on target creature.

Enchanted creature gets +1/+1 and lifelink

Cartouche of Ambition occurrence in decks from the last year

The Beast and the Harlot
by AultimusPrime

SynergyBuild on Best cards to be added â¦

All required enchantments for control-voltron:

Wincons: Helm of Obedience + RIP, Empyrial Armor , Steel of the Godhead / Cartouche of Ambition (Your choice)

Possible enchantment: Arcane Laboratory (slightly better than Rule of Law , unless Pyroblast / Red Elemental Blast are played often), Aura of Silence , Imprisoned in the Moon , all dependent on metagame.

Otherwise, run a lot of 2cmc or less mana rocks, the best 0-2 cmc interaction, some hate, lands, etc. and win.

I'm just curious what your thoughts are on Humility since it's such an oppressive effect that you have immediate access to with Zur. You wouldn't necessarily lose your Voltron win con either if you drop a Humility before Empyrial Armor and Cartouche of Ambition because the earlier timestamp of Humility would allow Zur to retain the effects from Empyrial and Cartouche, but it would remove these effects if it came out afterward instead for example.

Something to think about. I think your deck can work around a timely Humility really well and cause most decks in the current cEDH metagame to struggle until they can find an answer. It feels incredibly viable and seems like your deck isn't even hit as hard as HEMAN lists that are constructed around the card.