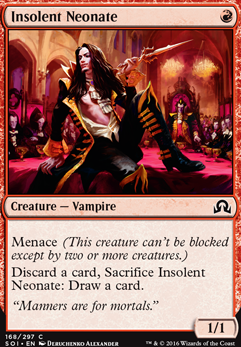 Discard a card, Sacrifice this: Draw a card.

I'm also trying to make a deck of that kind, and I have some ideas for the sideboard :

I don't see many cards that you would absolutely want to side out, except your 10 instants against bogles, so your sideboard should have creature destructions that handle hexproof : lightning bolt and dark withering can be swapped for more diabolic edicts/chainer's edicts, Fleshbag Marauder can integrate your toolbox and Crypt rats too. I prefer Electrickery to Nausea as it can be played at instant speed.

Tortured Existence lets you play some maindeck toolbox too and have one of some cards that can be maindecked in madness too : 1 Gurmag Angler for instance, 1 Insolent Neonate is not a toolbox card, but can still be maindecked and give more options

2021 saw MH2 give 5 new madness cards, namely Kitchen Imp and VOW introduced blood tokens as a new way to discard, 14 card in the right colors, but only Voldaren Epicure caught my attention, Blood Fountain has its uses but is too slow here.

Good List, I would recommend playing less tap-lands as in a deck like this, playing a turn 1 discard outlet is crucial to be fast. In an aggro deck, being stranded with 3+ tap-lands can leave you dead in the water. I see your point of Bloodmad Vampire Being bad because of one toughness, however it is one of the best madness creatures simply becuase it is such a threat to the board. For an example, if you play a Putrid Imp or a Insolent Neonate turn 1, an end-of-turn Bloodmad Vampire on turn 2 can really force an opponent's hand. I find that in your list, especially in playtesting, there is too many discard outlets and not enough beaters. Having more than 1 Putrid Imp or Cabal Initiate in play can feel like a waste that could be a Skophos Reaver or a Bloodmad Vampire.

Very good list if you can check out my list A Vampire Storm *Primer*, and let me know what you think.

For your discussion of the new Cards from what came out in the Midnight Hunt, I think that Vampire Socialite is basically just a two mana vampire lord which is very good and especially ideal for an aggro deck. Voldaren Ambusher is great and maybe even the all-star of the set as normally you don't want to play removal in Edgar Markov because it hurts the deck's momentum but this lets you have creature removal, and tempo. Falkenrath Pit Fighter has rather good stats and a good-enough ability for a 1 drop.

As for the new cards, I will just discuss the ones that seem worth that time. Voldaren Estate looks like a no-brainer include as it gives all colors of mana in addition to card cycling which is nice. Dominating Vampire looks pretty sweet for aggressive tempo and is also removal if you have a sac outlet which is not too difficult for vampires. Voldaren Bloodcaster looks like a pretty decent card overall, and am interesting to see how it actually plays. The new Olivia could be pretty good value, overall a decent option for inclusion. Bloodtithe Harvester seems not quite as good as Voldaren Ambusher, but still nice to see more removal vampires but the 3/2 statline is pretty nice for 2 mana. Lastly, the new Edgar, Charmed Groom is a bit underwhelming but overall a pretty decent card

As for your deck, it looks good just would make a few minor tweaks in card choices for the aggro deck, but overall the deck looks to have very good synergy for the most part and cohesion towards its goal as an aggro deck. Phyrexian Arena is a slow card advantage engine that is more suited towards midrange Edgar Markov decks. Nighthawk Scavenger is pretty much a strict upgrade over Vampire Nighthawk as just having an opponent crack a fetch land means that Nighthawk Scavenger is just as good with even more potential upside. Bloodhusk Ritualist has an ok multikicker effect but the main issue is the atrocious statline of a 2/2 for three mana. Universal Automaton is just a 1/1 for 1 so pretty much any 1 drop vampire is an improvement, ie Viscera Seer Insolent Neonate, Stromkirk Noble. Also your deck noticeably has no removal which I agree for the most part with the sentiment but would strongly recommend at least 1 card for mass enchantment removal, as one of the biggest weaknesses of an aggro Edgar Markov deck is enchantress decks with propaganda type effects so it is very valuable to have those effects if you need them. Lastly just want to throw in Stromkirk Condemned as a vampire lord that is decent.

Gleeock: I know right? I'm holding out on the hope that Crimson Bond will feature some new Werewolves too.

Dennick, Pious Apprentice: Spirtual sucessor to Roalesk, Apex Hybrid in commiting suicide by legend rule for fun and profit. Cast one copy of his card, then later cast another copy to send it straight to the graveyard, ready to be Disturbed.

Butcher the Lineage: I like how the art makes it look like she's scratched the man on the painting bloody

Florian, Voldaren Scion: Looks like an Insolent Neonate that cleaned up his act. One weakness of impulsive draw is that you risk exiling something you can't play this turn; digging nicely reduces this risk. Has an obvious place in the 99 of Prosper, Tome-Bound.

Firmament Sage: I wonder how much this effect would have to be nerfed in order to be white. Just "Whenever night becomes day"?

Sunstreak Phoenix: Like Dragons, I don't feel Phoenixes are appropriate for this plane. At least it's a heron.

Hallowed Respite: Neat tweak off Flicker. Dunno what the deal with the nonlegendary clause is tho.

Hello again Saccox! Good suggestions both of them. Iâve actually been looking for cards like this for my sideboard, some creature that can get through decks with good defence. I had been looking at Stromkirk Noble myself but, I do like the card draw mechanic of Insolent Neonate. Iâll have to play test some to which one I end up with.