Other multicoloured creatures you control get +1/+0.

Whenever another multicoloured creature you control is put into the graveyard from the battlefield, return it to its owner's hand at the beginning of the next end step. The Coalition
by Dezz695

Oops all Blades
by Flunkommunism 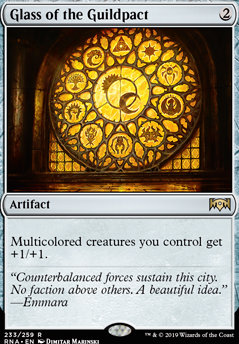 enpc on Could I get help with â¦

Tana, the Bloodsower and Ravos, Soultender would be your best bet. yes, this adds black to the deck (which you could just run to cast Ravos) however unlike Rienne, Angel of Rebirth, Ravos doesn't need to see stuff die to get it back from graveyard.

Additionally, Tana not only gets buffed by melee but also makes a bunch of saprolings which in turn get buffed by Adriana, Captain of the Guard. This by itself provides a pretty good win condition, meaning that you free up a few slots for more ramp, since this deck is going to be very mana intensive.

I'm trying to rebuild my Rienne, Angel of Rebirth

deck, but I don't know what cards synergize nicely with her, or what to cut from the current list. The deck: Rienne No.2: Return of Colors I haven't added the lands yet but its still 91 cards. Do I have too much Ramp? any help would be appreciated. (The cards under cards I dont own are ones I'm currently looking at buying) Thanks!

How about Rienne, Angel of Rebirth as protection for both your commanders and some of your creatures? Garruk's Horde , Vizier of the Menagerie and similar effects would be pretty great as well.

As a huge fan of both angels and multicolor cards, I'm definitely including Rienne, Angel of Rebirth