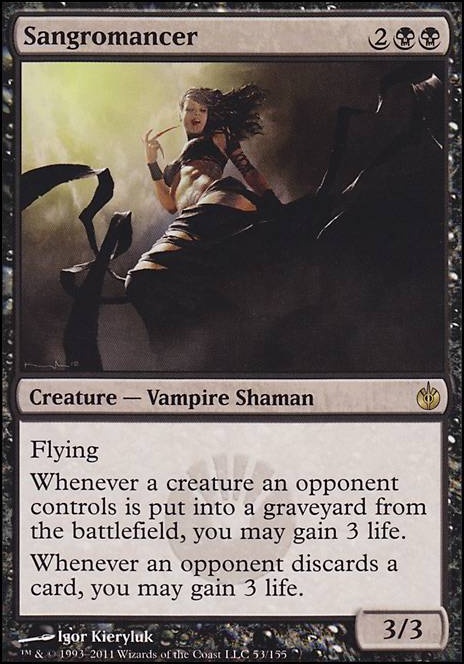 Edgar as fast as I can get him for EDH. This used to be a 1v1 (Dual-Commander) build, that was based heavily off of another users build from 2017, except I can't find it now. Since then Edgar has been banned in 1v1, and I've changed some things to adapt it for Multi-EDH where he is still legal. I'm new to tappedout.net, and didn't really build these at the time with sharing them in mind. That said...

This was aimed at being the fastest speed engine I could get together for Edgar Markov when it was 1v1, however now it's been bulked up a bit to withstand threats beyond turns 3 and 4 in multiplayer games. I've kept a close eye on CMC as to not slow it to a halt, but we have meatier and more purposeful vamps now.

I believe that vampires, even in Modern with 4 ofs of the best vamps, is just not good enough alone. I had the best luck with a Modern mono-black build, using sanguine effects. I tried B/W vamps with some taxation, and the whole kitn' caboodle... but nothing ever felt competetive enough until the vampires were replaced with another creature type. Well... If you're stubborn like me, and you realllly want to use these vamps, then I feel EDH and Edgar is the best current way. BUT! It's never worked out for me with only the best vamps. I've had my best games with the CHEAPEST converted mana vamps. Since this approach won't scale for multiplayer, I kept the low cost in mind as a bonus for Edgar's Eminence, but still concetrated on some standalone badass vampires. This takes pretty good advantage of Edgar's Eminence ability, and really exploits what is so special about having him as a commander to begin with, while also making sure we have real threats for our opponents. Edgar doesn't even need to be played (you still can play him when convenient and beat face), and you still get 2 for 1 vampires most turns.

Some folks feel that the 2 for 1 vamps are nice early on, but quickly get dealt with and overtaken. Well, that's where speed and balance come into play. There are PLENTY of super fast and cheap vampires to regain board state if an opponent wipes creatures out. I've included what I feel are the best of the best permanents to help boost the vampires in power as well. The vampire specific cards aren't ALL the greatest, so I went with things like Eldrazi Monument. It just works. There is good removal, and this is really where having the White shines in this deck (I'm looking at you Vindicate and Anguished Unmaking). I still find that out of the cheap cmc creatures, the Rakdos colors are best. So consider this a mostly Rackdos deck, splashed White for some utility, and some of the new Ixalan vampires that have White and are worth playing.

We want to be sure we get those super quick 2 for 1s, and with a lot of cheap to cast creatures, we don't need many rocks or ramp. Just enough of the best spells for these colors as to not loose to an Armageddon. Beyond that, every slot should either be a vampire or something that makes them all beastly.

As always, I am TOTALLY open to any suggestions and comments. I am primarily a casual player, but have been forced to get a bit more competitive with my builds lately, because the guys I play with are cutthroat. Sadly, and speaking of "cutthroat", for a deck with cheap vamps, I don't have a copy of Vampire Cutthroat in here yet. I'll probably look for one soon and try it out.