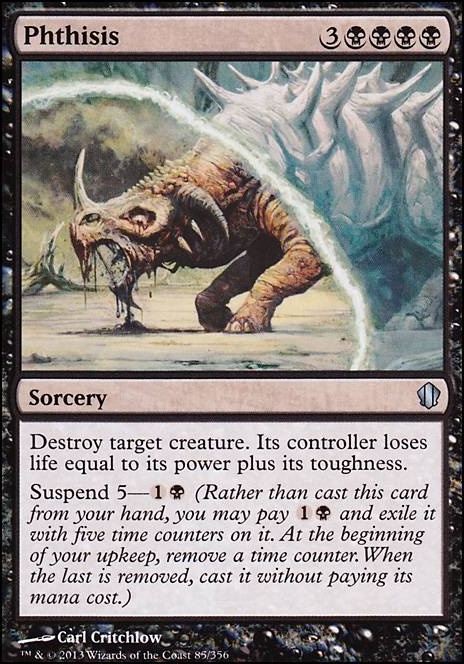 Destroy target creature. Its controller loses life equal to its power plus its toughness.

Suspend 5-(1)(Black) (Rather than play this card from your hand, you may pay (1)(Black) and remove it from the game with five time counters on it. At the beginning of your upkeep, remove a time counter. When the last is removed, play it without paying its mana cost.) 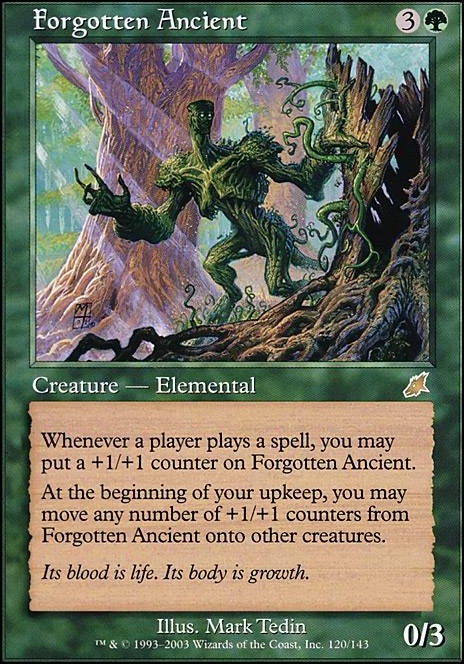 Spelly Jelly(primer? IDK, but I sure typed a lot)
by katanafish

You know I'm curious. I had a tasigur deck that slowly morphed into a Thrasios / tymna deck, and I've seen 3 tasigur lists that have Phthisis and I'm wondering if that's in there for a specific reason or you just had it lying around

You must choose a target for Phthisis when you put it on the stack, and can't change that target later without some outside effect telling you to (such as Redirect). Additionally, if all of a spell's targets become invalid, then the spell "fizzles" or is removed from the stack with no effect.

So you can't change the target to the 7/7 after you've already targeted the 10/10, and your opponent won't lose any life if he Putrefys his own creature.

May I suggest Shadowblood Ridge instead of Temple of the False God. This filter land may help you pay for a turn 2-3 Vial Smasher the Fierce. Also Exotic Orchard and Shivan Reef are not expensive. You might want Ancient Excavation, Steam Augury, Fact or Fiction instead of Frenzied Fugue, Thought Scour and Extract from Darkness for fuel for Delve. Mind's Dilation, Sunbird's Invocation, Stolen Strategy, Fury Storm and Fevered Visions can often win the game by themselves. You might want some counterspells which can also be card advantage: Izzet Charm and Arcane Denial. Disdainful Stroke and Swan Song stop almost everything for cheap. Have you tried Phthisis? Bojuka Bog and Rakdos Charm are good against graveyard decks (which is a popular theme). You may also consider Brainstorm for better control of your draws.

I see your point, and it is quite the divergence from the original Phyrexia. But that makes sense. Only the glistening oil, one of the tools employed to achieve Phyresis, was left. The philosophy of Phyresis was a creation of Yawgmoth's cult and societal response to Phthisis. Mirrodin doesn't share that same cultural history and thus Phyrexia developed differently. It is New Phyrexia, after all, not Phyrexia Reborn. And yes, a Reborn Phyrexia would have something to say about New Phyrexia, and it wouldn't be kind.

Plus, it gave wizards a chance to explore the range of possibilities in the color pie. Green and White were the primary opponents of Yawgmoth's Phyrexia. Here, Green and White can be corrupted and still maintain their essential link to Green and White mana. Red becomes the primary opponent because of its themes of independence, individuality, and chaos. Viewed as a part of the color wheel writ large, it shows that mana is largely a physical force and has only a small "spiritual" component. It's the thoughts and beliefs of those wielding it that shape how colors manifest.

As a final note, and one more relevant to your first article about the old (and better, yells the reactionary part of me) Phyrexia, Phthisis is an archaic word used to describe a wasting illness, like tuberculosis or anorexia. In magic, it doesn't fit well with tuberculosis, but rather seems to be a case of radiation poison, judging by Venser's symptoms and descriptions of the Thran. The Thran powerstones seem to have leaked harmful radiation, and this may have explained Yawgmoth's inability to fully cure Phthisis and his chosen solution--metal.