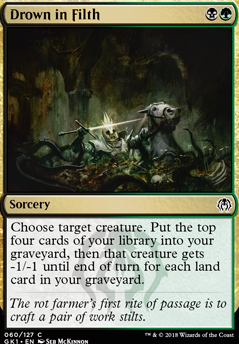 Put the top four cards of your library into your graveyard, then target creature gets -1/-1 until end of turn for each land card in your graveyard. 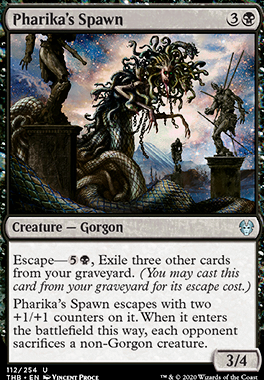 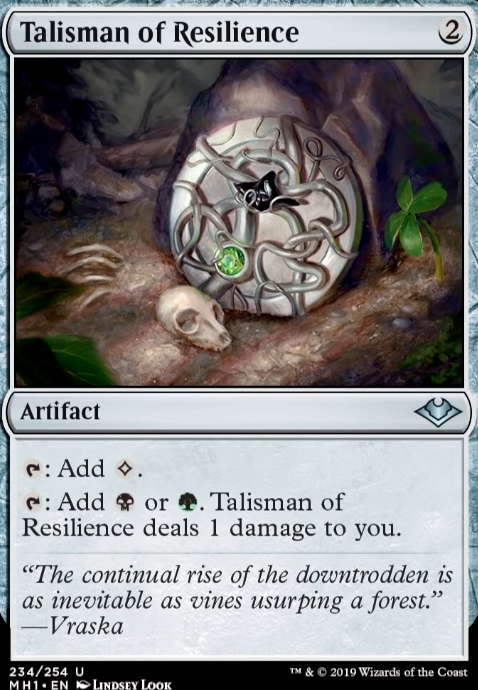 You'd have a pretty hard time against spellslinger deck with your deck, so for that, Hymn might be a good weapon. As it can help your Goyfs grow against other decks as well, you should try it. To keep your card type balance, I'd kick Drown in Filth for them.

Glad I could help. One more thing: Even with Chant, your curve ends at six and you can dig pretty deep into your deck thanks to Drown in Filth and Grisly Salvage, so going to 23 lands seems reasonable. Adding in some copies of Evolving Wilds or Terramorphic Expanse seems good to get lands into the grave more easily.

multimedia on New player looking for a ...

Hey DevisTheWayfarer I'm still not settled with Skaab Ruinator . I removed it once (and this deck became BG), but honestly, there were times when I wished I could just cast from the graveyard, so I put him back. Sure, it exiles 3 creatures, but the only creature I have that can come back to my hand is Stinkweed Imp , so I'd cast Skaab when I find myself in a difficult situation in the game. It's a 3-drop for a 5/6 flying, so I think it's a good trade-off.

Necrotic Wound is great, but it doesn't cause any mill. If your deck has more Dredge creatures, I think that is a great option. Because mine doesn't, I'm relying on Drown in Filth for more self-mill abilities.

Wanna share your deck so we can discuss some ideas? :)

Hi I'm building a similar deck, but I'm having several doubts. Isn't it better Necrotic Wound than Drown in Filth ? Furthermore, don't you think that Skaab Ruinator could be dangerous for your strategy?