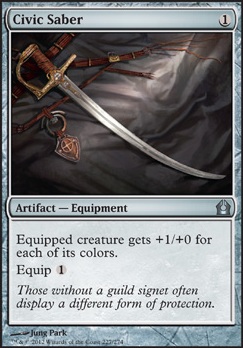 Equipped creature gets +1/+0 for each of its colors. Equip 1

Civic Saber occurrence in decks from the last year

Stop Hitting Yourself
by Tuba1060

I did go for a budget manabase because my priority is on the big spells rather than the lands and such. But I will definitely keep this in mind! I need to add Noble Hierarch for sure.

Unfortunately I cannot add Hunter's Insight and Berserk and the like because Progenitus has protection from EVERYTHING! So I cannot target them or equip them with Civic Saber or enchant them unfortunately!

I will keep working on this deck and keep coming back to your comment, however. Thanks again, as I really do appreciate the feedback!

Will definitely look to add in Spirit of Resistance wasn't aware of it until now. Same with Vow of Flight and I'll take out the green vow to throw it in.

Ward of Bones would be great for this deck, since it won't be artifact heavy and my meta tends to be the opposite, hence why I threw in Energy Flux to anger them.

Of the Karona buffs, I'll probably throw in the Civic Saber since I can play it before Karona hits the field.

Civic Saber is a viable replacement for mace, I run a type of this with Serra Ascendant and more life gain to flow with Citadel. Citadel is a perfect card for her and the only decks I've seen (My own personal included) to produce a legendary board of tokens by t7-8 for wins. The fact she has Lifelink is too perfect, maybe K'rrik, Son of Yawgmoth would help bolster your deck synergy as well if you had more black. I don't usually +1 any Alela deck without Citadel, So +1 sir. Nice deck.

Looking for cheap control artifacts like Aether Spellbomb and Nihil Spellbomb can give you cards too.

You are using a lot of deck space for blinking something, and I'm betting its your Sphinx's.

My favorite combo in my Alela deck for Life/Speed is Divinity of Pride + Bolas's Citadel . This + Mystic Forge to get lands out of the way can flow a lot of permanents into the battlefield.

Running it with low cost artifacts/enchantments means you will get to trigger Alela repetitively. Cards like Vampire Nighthawk or anything this versitile can be a good flier for the deck. You'll just be trading Damage taken with citadel with fliers.

Because your not running strictly fliers, I see cards taking up space to bolster them. Just save yourself the trouble and put fliers in here. Alela is meant to overwhelm or cause wipes mid-game. If you aren't getting her out, triggered by 5-6 turn heavily, you will probably fall behind?

Swiftfoot Boots / Lightning Greaves / Whispersilk Cloak all can protect her in the mean time.

Emry, Lurker of the Loch can protect your artifacts.

Nice deck, hope it works out getting tuned up for you.