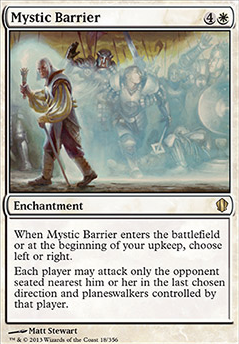 When Mystic Barrier enters the battlefield or at the beginning of your upkeep, choose left or right.

Each player may attack only the opponent seated nearest him or her in the last chosen direction and planeswalkers controlled by that player.

Mystic Barrier occurrence in decks from the last year

Just Leave Me Alone
by irish_trunks

I love these types of decks, But I have one suggestion. Considering you have a bunch of cards that destroy all creatures (basically) and you have a bunch of enchantments you could put in Mystic Barrier and Sphere of Safety. These will just make it incredibly hard for anyone to deal damage to you with creatures. :)

Long May She Reign

This is nice. I have a soft spot for combat control decks, got to make myself one someday.

Couple suggestions you might be interested to consider: how about Jazal Goldmane as another Marton option? Mystic Barrier might also be a fit, another way for you to control the flow of combat. Gustcloak Savior is a Reconnaissance on a stick if you'd like another effect like that. And Ogre Siegebreaker might prove to be a bit more flexible Silent Assassin, though it's not, well, an assassin.

One question I'd like to ask: how does this deck perform with the only reliable draw being the monarch? Is that enough? Never really played with monarch myself, so I'm curious.

That being said, I like every level of your defense, I love how most of your instants can be fetched with Sunforger, and I love seeing Master Warcraft being played!

The Chain Veil and Ajani, the Greathearted can help get up walker's loyalty. additionally, Tezzeret the Seeker can tutor the chain veil.

A fun interaction in ur deck is with Astral Cornucopia and Atraxa. Atraxa can give it more counters, and it can get more mana.

TriusMalarky on Suggestions for a very political â¦

I was going to suggest Illusionist's Gambit as well, and Reins of Power. Trade with player A and then attack player B with A's creatures.

Rite of the Raging Storm and Mystic Barrier

I wanted to make an EDH deck with Pramikon, Sky Rampart

that uses the idea of extra turns, stealing turns from other players, and left/right only combat style. I have the idea for the big part of my deck but cannot seem to fill in the rest...

I will use [Pramikon, Sky Rampart]] as the commander and choose one direction and Mystic Barrier to choose the other so it shuts down combat. I then will use cards with effects like Part the Waterveil, the Ultimate of Ral Zarek, Emrakul, the Promised End, and Mindslaver to take advantage of full on turns. My original endgame move would be Approach of the Second Sun by using draw spells to achieve it through extra turns.

@king-saproling: I seriously have to owe you this time if you wish to help. Currently making a Creatureless Superfriends Deck (Thus the Mana Echoes + Sliver Queen combo. Outside of Tokens, There are no other creatures in the entire deck. Even according to some, besides all of Tappedout, Creatureless seems to be the better way out, as you could use Boardwipes w/ no regret, Asymmetrical Stax, & even HUGE amounts of Walker Shenanigans. But w/ 65 cards to cut, a lot of Walkers, in addition to several guidelines this time, I will have to show them myself:

HUGE set of Priorities if this deck needs them. 65 Cards to cut, & only little room for improvement/adds & precarious stuff to cut. That said, I still have a limit on budget (I can't even afford one card at $599.), that said, It would be interesting what you could throw into a CREATURELESS Superfriends Deck as well...

good luck, should you accept...