Daxos of Meletis can't be blocked by creatures with power 3 or greater.

Whenever Daxos of Meletis deals combat damage to a player, exile the top card of that player's library. You gain life equal to that card's converted mana cost. Until end of turn, you may cast that card and you may spend mana as though it were mana of any colour to cast it. 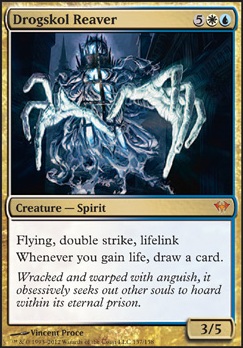 Daxos of Meletis
by Gorman.22

How to Lose Friends and Influence Permanents
by DriftingEpyon

Enchanted Adventures with Estrid
by Azeral-5594 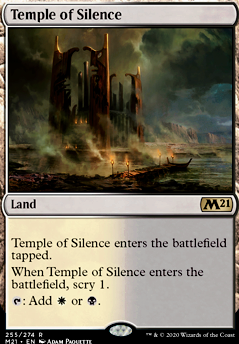 With the new normal of degenerate combo and busted value engine commanders, my plan is to come out of this with a lower curve, aggressive deck to put the pressure on the Muldrothas and Atraxas of the world earlier in the game. I have come across two main problems in my brewing, however:

1) A lot of my decks just aren't good enough to beat some of these decks. My perfectly serviceable Ephara, God of the Polis deck could stand on it's own 2 years ago, but now I am constantly run over, and my creature theft deck does nothing against someone who can play Bolas's Citadel and basically win on the spot without creatures.

2) For the life of me, I cannot escape Jund. My 3 decks that are still able to hold their own are mono-, , and . I also frequently catch myself brewing in the Jund colors, and I want to branch out.

The two that initially caught my eye were Daxos of Meletis voltron/tempo, and Adeliz, the Cinder Wind spellslinger aggro. However, while I have seen these generals perform well in the past, I'm worried if they've become outclassed by the precons of recent years. Does anyone else here have insight, or perhaps another (preferably 2 color) commander that will fit the bill for me?

maxon thanks! Glad you enjoy it. I was a bit worried about it being perceived as overpowered but I actually think I landed pretty well on it in the end. The biggest considerations were not giving it a mana-fixing ability like Daxos of Meletis to cast the stolen cards (as I figured that would be potentially busted) and making the milling ability a tap as opposed to just a generic mana activation like Syr Konrad, the Grim. Either I think would have made this too strong.

I haven't played much with the lands but each card in the decks I build are cards I have on hand or en route. Actually in the case of Nykthos, Shrine to Nyx, I did get one of those shortly after the Theros block but it, like many other cards I had before, had mysteriously evaporated out of existence, along with most of my first/original EDH deck (Daxos of Meletis). I wasn't sure if both of these lands would work but upon closer inspection of my deck..

Nykthos, Shrine to Nyx: All the enchantments have a single in then but the creatures turns out will typically have or in the cost, this could be handy but is definitely a maybe.
Valakut, the Molten Pinnacle: This is flippin' sweet and in this deck it speaks for itself, I love it.

Currently, budget limits which cards I can allow myself to add to each deck I make. The most fun decks I make also rely heavily on forgotten out-of-the-ordinary cards that in any other format or circumstance would be folded and used to stop a table from rocking.