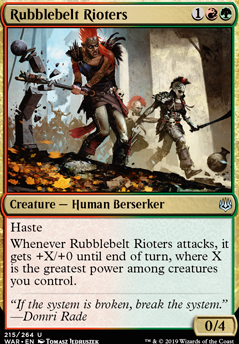 Whenever Rubblebelt Rioters attacks, it gets +X/+0 until end of turn, where X is the greatest power among creatures you control.

The Fighting Type
by PathbreakerShogun

agreed Wulfgar of Icewind Dale is amazing, but i have him in deck and Klauth, Unrivaled Ancient as the commander
i should try a couple games with wulfgar in the zone, since he works amazing with other cards in my deck like Grand Warlord Radha, Utvara Hellkite, o and my favorite work around for stax Rubblebelt Rioters

Oh and maybe these too: Tana, the Bloodsower

Nice idea! I just threw this together on MTG:A. I find that Infuriate works super well with arcanist. Giant growth in red means this deck goes fast. Also, Rubblebelt Rioters work to close out the game once the arcanist or the spell gorger are huge.

Domri's Ambush and Rubblebelt Rioters aren't very effective here due to the low power of your creatures. with so few ways to get lands into the grave, Ruination Rioter isn't effective either

More precisely, the Combat Phase is broken down into the following:

So again, technically the +X/+0 happens after the Rioters attack (because them attacking is what triggers it), but will finish resolving before they actually deal damage.

Let's say you have the Rioters, a 4/4, and a 2/2 on your side of the battlefield. You declare Rioters as an attacker. The ability triggers, and when it resolves, it gets +4/+0 because that's the greatest power among your creatures. Then your opponent gets to decide if they're blocking and with what, and then damage is dealt.

The phrase "whenever [this creature] attacks" specifically refers to it being declared as an attacker during the Declare Attackers step of combat. You declare Rubblebelt Rioters as an attacker, triggering its ability. Once the ability resolves, it will get +X/+0, which happens before blockers are assigned.

So in short, it happens after it attacks, but before any other part of combat is handled.