Other creatures you control get +1/+0.

Whenever a nontoken creature you control dies, Judith, the Scourge Diva deals 1 damage to target creature, player or planeswalker. Please Ignore Our Construction
by PyRoMaNiA2014 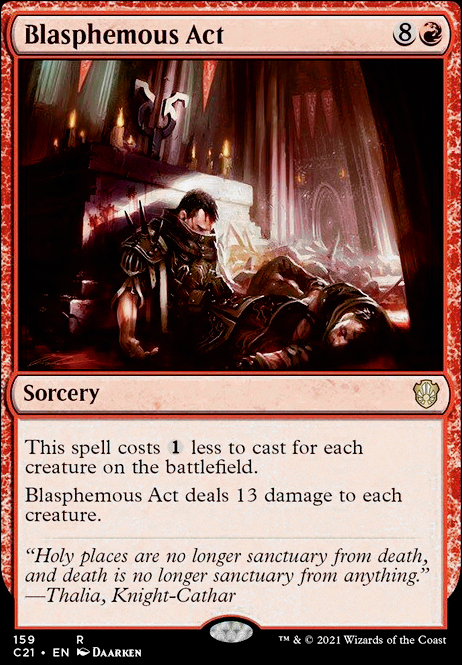 Having acquired some cards specifically for this deck, I have made a few changes, which are as follows:

Cloudchaser Kestrel Already have a creature I can recur for enchantment removal, which is also one mana cheaper. Yes, I lose a flyer, but removal is more useful than a tiny chump blocker.

Nekrataal Useful, but has too many restrictions on what it can destroy. I think I have better options.

Rakdos Signet Doesn't do enough, and is too slow for an aggro deck.

Zulaport Cutthroat A card that I love but doesn't do enough in this deck to warrant an place.

Swords to Plowshares No other reason other than I need the copy elsewhere! Goes into the maybe board in case this deck sees heavy play.

Savai Crystal An upgrade on Rakdos Signet as it provides all three colours of mana, and doesn't slow the deck down. Yes it's one more to cast, but doesnt require mana to activate and has the added gravy of being a Cycling card too, if I need to draw a card.

Judith, the Scourge Diva Small bump to creatures which is handy, and the ability to deal targetted ping damage to a target. A really useful target to get some Deathtouch on I think.

Thrilling Discovery Card draw, dumps cards to the graveyard and some incidental lifegain. Not a bad trick I am hoping.

Subira, Tulzidi Caravanner Makes creatures unblockable, very useful for several creatures in this deck. Also allows for my hand to be cycled if I can get a creature through.

This deck seems sweet. One thing I think would make it better is taking out some of the generic staple ramp and removal and replacing it with ramp and removal that helps the decks strategy.

For the ramp, might I suggest Priest of Forgotten Gods as a great source of card advantage, removal and mana with all of your tokens. Pitiless Plunderer is also great for fueling the mana needs of decks like this, It is the single best card in my korvold deck and I'd be surprised if it didn't do work here.

For the removal there's numerous options of sackable creatures to pay off all your triggers such as Plaguecrafter , Merciless Executioner , Fleshbag Marauder , Demon's Disciple , Shriekmaw (this feels like too many as you still want a few instant speed, no restriction pieces of removal to save you in a pinch but take your pick of your favourite).

Now for draw, Yawgmoth, Thran Physician is one of the most broken cards in any aristocrats deck,it's a sac outlet, removal for small creatures and it draw hella cards, definite include if you can afford the fairly large price tag. Now there aren't that many cards that draw whenever a TOKEN creature dies but there are a few more niche ones that I'd include, Species Specialist would be good if you have alot of one particular type of token and Dark Prophecy is good if the mana base can support triple black. Also if you're worried about having enough nontokens to sac that you won't run the classics like Midnight Reaper i'd take another look at the Judith, the Scourge Diva in the list I'd also recommend the commander storm cards as they seem very cool in the list when you're repetitively casting the commander, especially the red one letting you basically recast the commander for every casting of it before. Theres also Ashnod's Altar and as another great sac outlet for the deck although idk how much you'll need when you've a guaranteed sac outlet in the command zone. If you're looking for cards to cut I'd immediately look at the instants and sorceries that are just generically good if you're planning on building solely around the back side. I'd also look at the expensive token makers such as Marionette Master and Siege-Gang Commander as those are effects you want earlier in the game. This deck seems very cool and I feel like there's a lot that can be done with it and I do love aristocrat strategies, one of the reasons black is the best colour.

i feel like the deck needs 2 things to be consistent, 1 a combo win with mill, and secondly a alt win con. the alt wincon is easy Carrion Feeder combos nicely with gravecrawler and other 1 cmc reanimation.

for a combo win there are a couple of options, first is using a sac outlet, haakon and universal automaton and anything that reduces its mana cost by 1, (meaning you can recast as many times as you like for free. the best choices ive found are Undead Warchief solid lord and alt wincon, Gravebreaker Lamia can tutor a missing part of you combo as well Frogtosser Banneret only costs 2 mana but has no other uses in the deck.

another option in the same direction is Pitiless Plunderer goes infinite with any 1 cmc reanimating creature and a sac outlet (so it also works with gravecrawler and outcast.) so is a more flexible combo card but less usful outside the combo)

the second method is Metallic Mimic + Putrid Goblin any either alter or carrion feeder, both of which could fit the deck tribal wise.

lastly i would consider Judith, the Scourge Diva as a 2 of, as it dose the job of conrade but also you can remove creatures and its an anthem effect (meaning you alter mill plan will be more effective before you can assemble a combo)

hope some of these ideas help

Nice deck (+1), I wonder if there's room to splash black in here for cards like Judith, the Scourge Diva and Showstopper for damage and Village Rites/Costly Plunder for card draw.

Witch of the Moors is an excellent grind piece. Basri Ket has outperformed for me. Judith, the Scourge Diva is awesome. Bounty Agent is a nice utility. Oh and lastly Magus of the Wheel