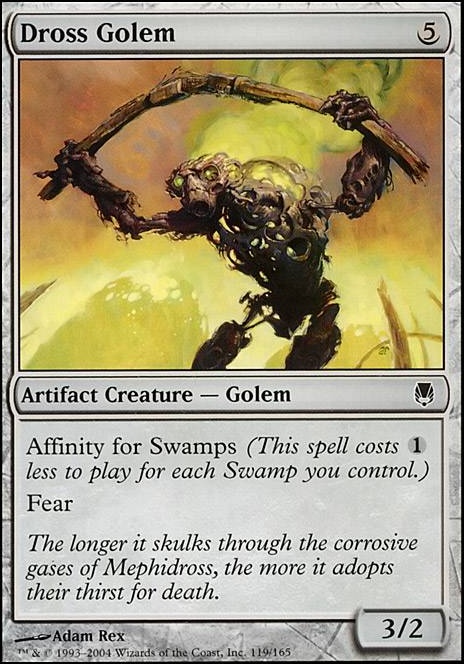 Affinity for Swamps (This spell costs (1) less to play for each Swamp you control.)

Afraid of the Blade: $70 Budget Build
by DBCooper

I agree that this card is trying to do too much. The last ability is absurdly broken, and way too easy to cause shenanigans with.

It is hard to evaluate its Affinity ability without seeing how good the other machines are; so youâd have to balance the entire creature type around affinity to be careful.

(Also, VampDemigod - Affinity can be for subtypes, such as with Dross Golem.)

I feel like most ways of making this deck faster would also make it riskier, but the additional risk could be worth it. A lot of decks don't run that much artifact hate, so Darksteel Relic might not do too much for you. Even if you removed it, you'd still have 8 indestructible artifacts, which is more than most other pieces of the combo, so it could be better in the side board to switch in in games with some serious artifact hate. If your opponent doesn't run any artifact removal, it's essentially a dead card. Instead, you could either have more Phyresis , or more artifacts that make a creature unblockable, or maybe Dross Golem - it has fear, is cheap for you to cast, and in a pinch, it's still an artifact (but a bit too easy to remove). You could also switch out some of the creature removal spells or the discard spells for more pieces of the combo.

Also instead of two [Gurmag Angler] and two Relic of Progenitus in the side I would put two Nihil Spellbomb and one Dross Golem or Wall of Tanglecord (For blocking your opponents Gurmag Anglers or other big things) or Gravepurge or another piece of hate such as Doom Blade, Disfigure, Terror or Murder.

Draw Putrefy, Cast Putrefy on Salvage Slasher (4 vs 1), I concede.

Thoughts: It performed a lot better that time. I didnt draw enough lands and my opponent had answers to my threats and hit hard.

I think Dark Ritual is only like 50 cents. It's just the printing that is expensive. Also I would advise adding a Dross Golem. It just seems pretty good in mono black.