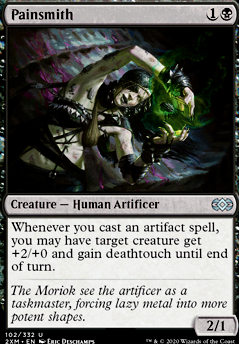 Whenever you cast an artifact spell, you may have target creature get +2/+0 and gain deathtouch until end of turn.

Alright, so.. I like where your head is at with this reply. Now that you've got a better idea of what I'm trying to accomplish here, let me address your new suggestions.

Vault Skirge over Thopter. Skirge is a fantastic card, no denying it.. BUT, Thopter offers me something that Skirge can't. A potential T1 5/5 flyer. I don't care what modern deck you're playing.. anyone that has an opponent dropping a 5/5 flyer on T1 is going to have sweaty palm syndrome for the duration of the round. Albeit, it isn't the most likely thing to happen.. But, A T1 Citadel, Opal, and Thopter isn't impossible.. and yes, I've had it happen. Even if the Ensoul doesn't happen until T2.. it gives me the opportunity to get a soft lantern lock out on T1, with a ready attacker on T2. It's really a question of speed vs lifelink.. and since my goal with this build was more aggro than traditional lantern builds, perhaps you can understand my decision.

Scrapheap Scrounger is a no-go for this deck. Why? My creature base is extremely lite. It just wouldn't be as effective as you would otherwise think. Also, it ties up mana.. which "could" slow down the deck, has zero evasion for when I may throw an Ensoul on it.. and can't even chump block for me.

Scrap Trawler is again a very interesting suggestion. I like this a lot, and appreciate the versatility of giving me another angle to work from. Whether it's a MB or SB card.. would really just require some playtesting.. But I like it. (Also, another reason to keep Thopter in. lol)

As for Glaze Fiend and Painsmith , all I have to say is.. eh.. maybe?? They really don't seem to fit the flow or direction of the deck. Both of these cards reward multiple artifact drops in the same turn.. like something you'd see in a storm deck. And beyond my first couple of turns.. I'm not puking my hand out. In fact, with one of these cards in my opening hand.. it would almost encourage me to hold on to those otherwise early drops.. until these guys could attack. Which slows down the whole plan and could really be more a detriment than anything.

And.. Inkmoth Nexus is a "temporary" artifact creature with evasion.. meaning, if I were to ever Ensoul it, I would lose the enchantment at the end of turn. Also, being a colorless land, it doesn't do anything to help my manabase.. and it can't help activate things like the Opal. So, I don't really see the benefit of having that in this type of deck.

From what you've said, I'll tailor this suggestion to the offensive rather than defensive, though why not have a little of both? What I'd like to suggest as a first change is replacing Ornithopter with Vault Skirge . The Skirge can be played for 1 mana and is a superior creature to the thopter, mostly thanks to lifelink, which is of-course a slightly defensive ability... Next is a choice of two, I add 4x of either Scrapheap Scrounger or Scrap Trawler , to make the space -2x Apostle's Blessing and -2x Tezzeret's Touch. Why one of the two scrappers? Simply put recursion, against your deck I'd side in artifact hate, not graveyard hate, one of these cards gives you a different angle of play. The last thought I had is two cards which no-one plays, but perhaps your deck could leverage Glaze Fiend and Painsmith , they aren't cards I'd run 4x, maybe as 2x? Or one card that does see play Inkmoth Nexus ...

I fully understand the desire to do something a little different, I started with a very of-the-shelf Hollow One deck, I've been playing on and off for 20 years so I already had Faithless Looting , Burning Inquiry and Goblin Lore , sitting in a box. Fast forward to now, the deck I'm playing is very different to the stock Hollow One, it has Adorned Pouncer and Soulflayer in it for starters. Here's the thing though, it's still essentially a red aggro deck, the core enablers are still all present, just my payoffs are different.

Why the tale above? You have marked this deck as a control deck and literally called it You just got Noped! which is evocative of Counterspell . This led me down the path of providing control based suggestions, but that isn't really what your looking for. Stall, bounce and counter is what control decks generally do, I'm not against thinking outside the box, but by definition when looking at someone else's deck list, without a description detailing their goals, suggestions tend to be made based on known factors. I hope my opening comment has introduced you to at least a couple of cards you weren't aware of or hadn't considered, good luck with your brew.

I have a rather off the wall suggestion, play black. Not for the Vector Asp, but because of three cards Tainted Strike, Glaze Fiend and Painsmith. Running these in an artifact deck which includes Cranial Plating and Inkmoth Nexus would be an infect deck without the infect creatures. It might work, it might not, it would definitely need testing, on the plus side you could run Vault Skirge as your 1 drop...

The deck that normally plays Puresteel Paladin and Sram, Senior Edificer in Modern is the Cheerios combo deck which uses a bunch of cost equipments like Accorder's Shield and Paradise Mantle, eventually casting Retract and winning with Grapeshot or Monastery Mentor. When it works it's a bomb and I know because I play the deck now and then - Cheap & Cherio. Now your deck is fairer than that, but the inclusion of the two main engines means that your opponents are probably expecting Cheerios.

I think you can play to that a little, even if you stay in mono white. You could use Glint Hawk or Leave / Chance to leverage more card draw. You might also want to consider splashing a different colour, each could be usable; red (Goblin Gaveleer), blue (Artificer's Assistant), black (Painsmith) and green (Assault Formation). Splashing would let you run other cards outside of those I've suggested too, but those suggestions are the first that come to mind.

My closing thoughts are that you might want to run a few more equipments in the deck and possibly look at the keywords Affinity, Metalcraft and Improvise. I hope this is of help and have fun brewing your deck.

I would also consider sideboarding Painsmith.

Sadly Chrome Mox is more affordable than Mox Opal because the former isn't modern legal. I also think you should switch Unnatural Endurance for Supernatural Stamina, while they are almost functionally the same, Stamina can save your creature from a -x/-x spell.

If you upped the artifact count, you could run Glaze Fiend with a surprise Tainted Strike or maybe a couple of Painsmith... You also might want a couple of Vault Skirge as an emergency valve...

These are really just some random musings, as I've been messing around with a similar sort of idea Venomous Concept, it isn't close to competitive but it could be fun...

Hello Darth_Savage, thank you for taking the time to look at my deck and offer some suggestions. Originally I made this to be standard legal when the sets involved had not rotated out. I actually never re-examined it for Modern besides changing the tag. It is also themed around aetherborn in black and the Marionette Master.

I like your suggestions of Glaze Fiend, Disciple of the Vault and Painsmith. They are all great for artifact black. The Glaze Fiend in particular with the Painsmith is excellent synergy. I am going to take your suggestions and add them to the maybeboard. I probably will not use them in this deck though since it is theme-based. But now I would like to tinker with the cards you suggested.

Now, about the Phylactery Lich. This guy incredible in the right shell. And Sagarys put this together; Ultra-budget: Wrath of the Witch-King. Take a look if you would like to see a very interesting frame around the lich.