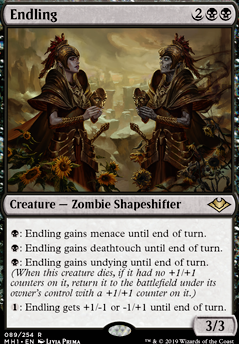 Ayara Goes to the Mall
by BestGunnit

The Worst Voltron
by Wizroberag

Does Mairsil, the Pretender have the potential to go higher?

What are the best combo routes for him? Untap with Aphetto Alchemist or Cinderhaze Wretch? Walking Ballista/Triskelion/Crystalline Crawler/Endling +1/+1 counters?

What kind of card would be needed for him to go up a tier?

I noticed that as soon as Fiery Emancipation was spoiled. A supercycle like this can take years to complete though, the Morphling -cycle ( AEtherling , Torchling , Brightling , Thornling , Endling ) took from Urza's Saga (1998) or Planar Chaos (2007), depending how you count, to Modern Horizons (2019) to complete. So it's a fun thing to look out for, but don't hold your breath for the next tripler enchantment '^^

What would you want the blue, white and black ones to triple?

Triple life is an easy, and slightly boring thing for white to triple, of course, triple cards (like a better Teferi's Ageless Insight ) makes sense for blue. I'm not sure what resource black would triple though, nothing obvious that black creates, better than the other colours.

Have you tried to include Thrun, the Last Troll? One of the best creatures to mutate on IMO. Also i gave Skithiryx, the Blight Dragon a try because of his regeneration effect. In my playgroups Endling was a high valued target to mutate on because of his Undying effect... one of my opponents had Mikaeus, the Unhallowed which i copied with my Volrath, the Shapestealer

- my Endling was undieable from that on :D Adding Muldrotha, the Gravetide would give your mutate-creatures in your graveyard a 2nd chance.

My Sultai-Mutate-List is an older one, have to actualize it.