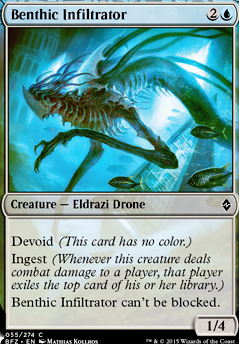 Ingest (Whenever this creature deals combat damage to a player, that player exiles the top cad of his or her library.)

Hipparchos - thanks for all the upvotes and the follow :)

Regarding Thassa, God of the Sea - I actually had this card in an earlier version of the deck but I realised that almost all my creatures had unblockable already. There are one or two that need help but I still run Benthic Infiltrator. I am still tempted by Bident of Thassa though, both for the draw and the ability to force others to attack each other.

Regarding budget.... that's a hard one to answer! The really basic answer is no, I don't put a budget limit on my cards or decks. The more honest answer though is that my budget is obviously not infinite and so I often don't have a lot of the really expensive cards. My mana base is pretty average (I don't have any fetches or shocks for example). One thing that helps me a lot is that I use a "shared cards folder" so that if I own an expensive card I can use it in multiple decks. When playing with friends I just proxy up the card I own so I can have it in lots of decks at once, but I have the real card in a dedicated folder so if I play in a more public setting I can swap the cards out for the real ones in just a couple of minutes.

I've found this really helped me with budget considerations because it's easier to justify buying a $20 card if you can use it in more than one deck!

Usually what all of this means is that my decks end up being a bit more expensive than "budget" but they're not top tier expensive stuff with absolutely zero budget concerns. I like to this they're very affordable to anyone semi-serious in the format or anyone who's been collecting for a long time.

Given Scylla's appearance, I think the closest in Magic would be an Eldrazi. Oblivion Sower, Void Winnower, Drowner of Hope, Benthic Infiltrator, or Bearer of Silence would probably be the best of choices.

Unfortunately, Prophet of Distortion, Blighted Cataract, Adverse Conditions & Cryptic Cruiser are all uncommons only, and therefore not pauper legal.

Crumbling Vestige could replace the land, maybe. otherwise I would just go up to 4x Evolving Wilds because it combos so nicely with Brainstorm.

I would put those 3 Slip Through Spaces in place of the 3 Adverse Conditions.

Instead of the Prophet, maybe do +1 Sludge Crawler, +1 Salvage Drone and +1 Benthic Infiltrator?

Grasp of Darkness (was printed as a common previously) will be more effective than Tar Snare (and probably just as hard/easy to cast), but there's also Terror and Unsummon/Vapor Snag to consider.

All I can suggest here is a lot of decision making cards and evasion: