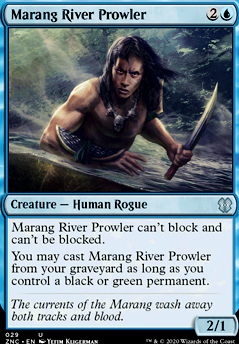 You may cast Marang River Prowler from your graveyard as long as you control a black or green permanent.

Marang River Prowler would be nice for a recurrable unblockable dude

Marang River Prowler would be good.

Have you thought about Marang River Prowler? I think that would be better than Inkfathom Infiltrator because it gets cheaper with Frogtosser Banneret and can also come back from the graveyard. Also I think the Royal Assassin needs to be just a straight up removal spell like Grasp of Darkness or Fatal Push. Maybe also some utility with a Bident of Thassa. Pestermite would probably be better replacing another creature and Hands of Binding.