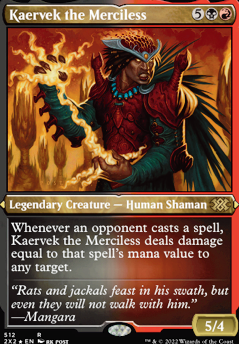 A brilliant celebration of all things hot, the Rakdos Festival of Fire is a once-in-a-lifetime opportunity to witness performances and events unable to be seen anywhere else in the multiverse.

Including a star-studded lineup of infamous celebrity guests, including:

While we may not be officially endorsed by Rakdos, Lord of Riots himself, you may still bear witness to horrors beyond your comprehension as ALL are consumed in this glorious carnival! Get ready to Light Up the Stage and punish your opponents for joining the party, with cards such as Ankh of Mishra, Painful Quandary, Repercussion, Tainted Remedy, and Zo-Zu the Punisher! Amplify the pain however you like, whenever you can!

Our headliner, Kaervek the MercilessÂ *f-etch*, insists the show, and the pain, must go on! Thanks to his lovely assistants, Harmonic Prodigy, Fiendish Duo, and Obosh, the Preypiercer, his burn ability will trigger twice and the sting will escalate! Oh, but that's not all. He can also send your opponents to an untimely end in a flash with the addition of Repercussion, which lets you engulf both your creatures and their controllers, and Fiery Emancipation, which triples all your damage, and your damage alone! So, if you happen to control both Kaervek, Prodigy, Obosh, the Duo, and Fiery Emancipation, then Kaervek will be dealing at least SIX TIMES THE DAMAGE, TWICE OVER, but it'll be TWELVE TIMES THE DAMAGE if you target your opponents directly! Plus, if you also happen to control Repercussion and Kaervek's triggered ability targets a creature, then all that damage snowballs all over again, and that results in SIX TIMES THE DAMAGE to a creature, and SEVENTY-TWO TIMES THE DAMAGE to that creatures controller! Phil Swift would be proud!

Or perhaps he would be even more once you say "I JUST SAWED MY CREATURE IN HALF!"

For my next trick, I'll need a volunteer from the audience!

That's right! Saw in Half kills a creature in order to give you two copies of it, allowing you to irritate your enemies twice as much! For example, you can split apart other creatures to get double ETB effects or double activated/triggered abilities for even further value. Why not take a chainsaw to Dockside Extortionist, Fiendish Duo, Gray Merchant of Asphodel, Harmonic Prodigy, Solemn Simulacrum, or card:1x Zealous Conscripts (MM3) f if you'll get two more copies of it as a result?

Now grab a weapon you like and find an opponent worth crushing!

Keep in mind that this is one of the more expensive commander options out there in terms of mana value. He costs , in total, and thatâs before you add any commander tax. So you better believe he'll be protected with artifacts like Lightning Greaves and Commander's Plate. But the wickedest equipment for Kaervek is Basilisk Collar, allowing him to instantly destroy any creature with the damage he deals, and gaining your life back whenever he deals damage!

When it comes to overkill, Toralf, God of Fury Â is second to none! He can combo with Kaervek to burn your opponents with the excess damage dealt to their creatures. But if Toralf happens to be equipped with Basilisk Collar, then once he has gained excess damage, he will only deal one to any other targeted creature. Because he now has deathtouch, he can continue to ping other opponent's creatures and act as a pseudo-board wipe! This plethora of damage dealing can also synergize with other wraths and board wipes, such as Blasphemous Act and Rolling Earthquake, and can potentially win you the game on the spot! In addition, Torbran, Thane of Red Fell can continuously add two more damage every time he triggers, snowballing to potentially lethal damage, while Repercussion burns your opponents every time he damages a creature! Work smarter, not harder!

What would a game of Commander be without some combos? The Rakdos Festival of Fire has plenty, from lethal blows to infinite loops.

And if you wish for something a bit more complicated, look no further than the un-holy trinity of Aetherflux Reservoir + Bolas's Citadel + Sensei's Divining Top ! Bolas's Citadel allows you to cast Sensei's Divining Top from the top of your deck for only one () life. Then you can draw a card and immediately put it back on the top of your library. Rinse and repeat, and Aetherflux Reservoir will gain you "infinite" life and card draw, which you can then use to shoot your opponents directly between the eyes!

These combos not only will allow for quicker games, but will confirm that they will end with your victory!

Need assistance? Seek out one of our various tutors!

That's right! If you're missing a vital combo piece, then tutors are your best friend! Dig through your entire library for any combo piece you need to win the game, with any of Black's signature searchers! Stack your deck before you draw with Vampiric Tutor or even Sensei's Divining Top. Search for what you need right away with Demonic TutorÂ *f-etch*. Or send a creature directly from your library to the graveyard (hint, it's gonna be Worldgorger Dragon) with Entomb. And if you can't search your way through your library, there's plenty of draw power, with cards like Erebos, God of the Dead, Night's Whisper, Sign in Blood, and Stinging Study. Even in Red, there's great mana ramp, draw, and impulse draw sorceries, like Faithless Looting, Jeska's Will, or Light Up the Stage! These crucial staples guarantee you shall see the cards you need to torture anyone who tries to prevent your inevitable preeminence!

The party never happened if nobody lives to speak of it!

The Cult of Rakdos is renowned for its dedication to protect your right to privacy. That's why if your opponent's party gets too out-of-hand, our state-of-the-art board wipes will eradicate all traces of life in the vicinity, no questions asked.

And remember, all of these board wipes can be found with the help of our lovely tutors!

Go out with a BANG!

And for the grand finale, not only are Blasphemous Act and Rolling Earthquake cataclysmic wraths, but when combined with Toralf, God of Fury Â or Repercussion, theyâre also the most devilish win conditions yet! As mentioned before, Blasphemous Act + Toralf, God of Fury will deal 13 damage to each creature, while Rolling Earthquake + Toralf, God of Fury will do damage to all creatures without horsemanship, and each player as well. Since most creatures will be overkilled, the excess damage can be dealt right to your opponent's faces! However, the combos of Blasphemous Act + Repercussion and Repercussion + Rolling Earthquake deals either 13 or damage to each creature, and then that damage is also reflected directly onto each creature's controller! Of course, the idea is to play these while you control no creatures (except for Toralf). But if you combine these with Fiery Emancipation, and if your opponents have as few as one () creature or token on the board, then that would be 39 damage to each creature, then 117 damage to that creature's controller if you control Repercussion, or triple the excess damage if you control Toralf! The Cult of Rakdos not only encourages overkill, it revels in it!

But most importantly, have fun!

The Commander / EDH format should be about long, casual games with your friends first, and caring about winning should come second fiddle. While this deck is very strong, has infinite combos, and contains deadly, powerful creatures that can punish your opponents, keep in mind that you may want to hold back if you want to stay in your play group. Perhaps keep a sideboard with you so you can swap out some of these combos if your friends deem them as too powerful for the table. I may have talked about how this deck is about winning, but thatâs mostly for flavor. Play to have fun first and foremost, and if you happen to win, then congratulations!

If you find this decklist entertaining, then feel free to give it an upvote (+1), I appreciate all the support and recommendations from you guys!

The Rakdos Festival of Fire

Coming to a local game store near you!