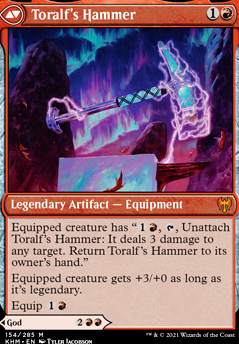 Equipped creature gets +3/+0 as long as its legendary.

Mythics in Standard
by AkroanEmperor

zapyourtumor Interesting! Thanks for your research. Toralf's Hammer replaced with Shadowspear .

zapyourtumor I will say that Unearth looks super good and I am 100% going to add that and go with a more grindy style.

I will also add though that Toralf's Hammer is better than it looks. The deck has little evasion so the +3/+0 can actually make the opponent hesitate to block OR you can put it on what little evasion there is with Hope of Ghirapur or Kari Zev, Skyship Raider to get in for real damage. We aren't playing Lightning Bolt either so the 3 damage can sometimes make a difference. The high mana cost doesn't really feel that bad either because everything else in the deck is so cheap and Mox Amber helps, too.

I also agree that Tymaret, the Murder King is not the greatest magic card but we do need a critical mass of legendary permanents for Mox Amber and a 2/2 that can give SOME* value off of additional legendary cards is the best there is. I am hoping for another decent legendary 1 or 2 drop in rakdos colors in the next set!

Interesting concept, but I have a few concerns.

First off, this doesn't really look that aggro-ey, besides the fact that the curve is low because of lurrus. With all the hand disruption, bobs, and advantage you can grind out Seal/Tourach and Lurrus, it seems more midrangey.

Also, a lot of the deck seems to revolve around Lurrus being on the field. How well does the deck function if Lurrus gets countered or removed? I see no way to get Lurrus back from the grave if this does happen. I think Unearth might help here as backup.

Tymaret, the Murder King looks terrible. A sac outlet that requires you to hold up 2 mana for a measly 2 damage in modern just doesn't cut it in my opinion. I'd be more forgiving to the card if it was something more than a vanilla 2/2 for 2 mana. You say it's good because it can sacrifice other creatures you control that are targeted by removal to be reanimated by lurrus, but any half decent player will remove the lurrus first and then this card becomes useless. I suggest Village Rites as a different sac outlet for some additional draw, and it also synergizes really well with Kari-Zev since we can sacrifice token Ragavan at end of combat.

Similarly Toralf's Hammer seems really bad as well, requiring you to pay 4 mana for a +3/+0 buff and also letting you repeatedly bolt for 6 mana. I understand that it only adds the buff if the equipped creature is legendary, which synergizes, but even if it just buffed +3/+0 to all creatures the card still feels unplayable. The flip side of the card also doesn't really do anything since the only noncombat damage you have is 2 damage, so the most this card will be doing is 1 extra damage.

Seal of Fire is obviously great with Lurrus, but if Lurrus removed or not on the field then you will definitely want Lightning Bolt over it. I'd maybe change it to a 2/2 split.