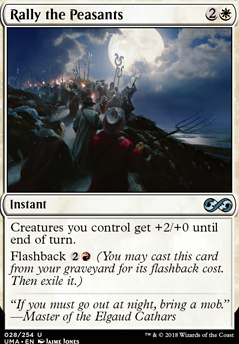 Thanks for all the suggestions!!

I ended up cutting a ton of Flashback cards from the deck honestly, as well as a few escape ones. They do make a spirit, but they ended up being a little less impactful than I liked. However, Prismatic Strands / Rally the Peasants might make their way back in.

I think while I do have a few humans, 7 may be a few too low. If I was running more hatebears like Drannith Magistrate I would maybe reconsider human tribal cards.

For another sac outlet I've been toying with Martyr's Cause , and I think I'll add it back in. It gives good protection to us from X spells or just damage based removal as well. It doesn't make the Angelic Titan combo win, but Altar of Dementia / Goblin Bombardment should be fine with that.

That's all really helpful! Thank you so much!

: Other creatures you control get +1/+0 until end of turn.

, : Gain control of target creature or artifact with Mana value 3 or less until Calen the Lyrist leaves the battlefield.

Taking ideas from Rally the Peasants and Charisma , with just a little bit of duplicity. Inspiring but manipulative, and always the center of attention.

Whenever Sariol of Many Oaths attacks or blocks, Sariol gains hexproof until end of turn and deals 1 damage to target creature.

: The next 1 damage that would be dealt to target creature this turn is dealt to Sariol instead.

Create a card with life gain as a cost, instead of an effect.

The Vampire Deck That Shouldn't Be

Maybe consider Renegade Tactics and Apostle's Blessing instead of Vampire's Zeal and Rally the Peasants to help force your Bloodmad Vamps and Sanguinary Marys through? Also, Tactics is a cantrip, so that's always good.

Hollow One is a very different deck in my mind. I've moved to trying that out since this list is very clunky. I'll post it later, but I don't think I'd play Rally the Peasants, and Scourge Devil seems too expensive to be effective. I'd lean more on Bloodghast or Goblin Bushwhacker if you're looking for hasty threats, though a lot of lists feature Monastery Swiftspear and some are trying Arclight Phoenix