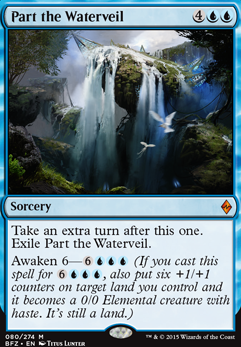 Take an extra turn after this one. Exile Part the Waterveil.

Awaken 6â (If you cast this spell for , also put six +1/+1 counters on target land you control and it becomes a 0/0 Elemental creature with haste. It's still a land.)

Cascading through the Maelstrom
by KingLonsur

Justice Sociey of America
by Commander_JAR

The most boring deck you'll ever play
by Pbudz75 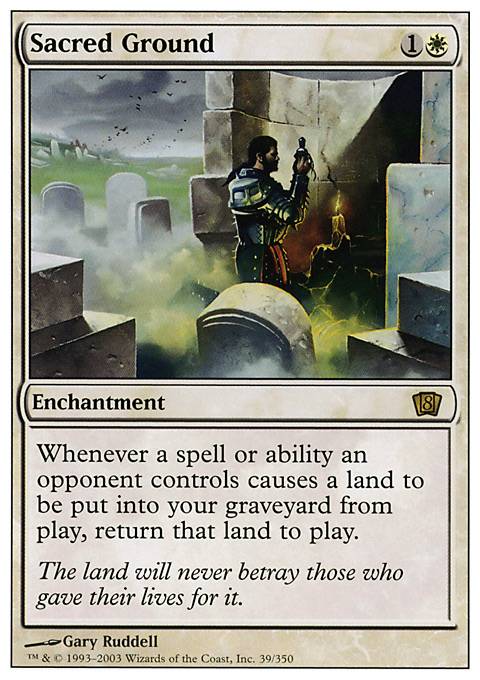 Since foretell is an alternate casting cost which allows us to cast a spell at instant speed, this is just a strictly better card in this deck. In general with Mizzix we'd rather play on other people's turns than our own, and to be able to stick an extra turn of our own in the midst of our opponents' turns is a huge upgrade.

Devastation Tide OUT Flood of Tears IN

With Mizzix these cards will usually cost the same, but the Miracle cost of Tide is rarely a boon to us, whereas flood's ability to immediately put Mizzix back on the battlefield is a huge boon.

HouseMarkovBWR I haven't looked at this list in awhile but extra turns are the bread and butter. Nexus of Fate

, Karn's Temporal Sundering , Part the Waterveil , Temporal Trespass and there's even a new spell and all of them are under 5 bucks each.

Rashmi Is Taking Some Turns

yes will do mate it looks like it can hold its own against most decks to me are you making it budget or is any suggestion ok. coz there are some cards that iv fond class in Taking Turns. Snapcaster Mage and iv not played with is but Jace, the Mind Sculptor would be class to and as an extra win con Part the Waterveil is good iv won most me games with that one and the art looks so good always a + ^^

, Karn's Temporal Sundering, Walk the Aeons and Part the Waterveil all help you dig your heels in as you amass a rouge army and you inevitably mill or kill everyone with card advantage or they scoop out of boredom.

I'm finding building it as a turns/tempo build really helps it slap. Capture of Jingzhou, Part the Waterveil, Time Warp, Nexus of Fate

Coastal Piracy and Bident of Thassa are very good :) redundancy is king.

Wizards of the Coast

This commander is on my list to brew but I'll probably go the turns route. Capture of Jingzhou, Time Warp, Karn's Temporal Sundering, Temporal Trespass, Part the Waterveil, Temporal Mastery and Temporal Mastery will all be jammed in there. Then I'd add in the value wizards you already have most of them but some to think about Spellseeker, Jace, Vryn's Prodigy Â Flip, Sea Gate Stormcaller and Baral, Chief of Compliance