Whenever you draw your second card each turn, create a 2/2 green Cat creature token.

: Until end of turn, creatures you control have base power and toughness X/X, where X is the number of cards in your hand. 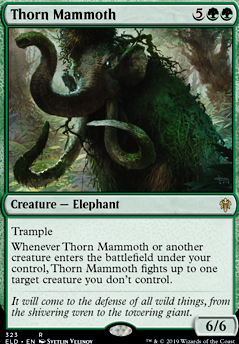 Cards in mi hand and Kitties on Land
by PastaBoi

Look at this little guy
by bladeoathkeeper

I love your articles. Personally i like Jolrael, Mwonvuli Recluse or Isao, Enlightened Bushi as green commanders. One loves card draw the other is a green samurai

Hey, nice update. I think you'll find that Korvold is an amazing Commander with sacrifice strategies.

Murderous Redcap and Putrid Goblin are other persist Goblins to combo with Grumgully and a sac outlet. Goblin Recruiter and Goblin Matron are tutors to get Goblins which is also nice with Dockside. Recruiter can setup the top of your library with Goblins to draw and assemble the Goblin combo with Korvold. Get Dockside first which makes mana with treasures to sac to draw with Korvold the rest of the Goblins and cast them.

Because you have Dockside then Temur Sabertooth can combo with it as long as Dockside makes five or more treasures then it can make infinite mana with treasures and bounce of Dockside with Sabertooth. This combo with Korvold draws into your deck letting you cast all cards in your deck or draw until you find Mayhem Devil as a win condition by sacing treasures.

Tireless Tracker, Mystery Booster version, is very good with Korvold as a repeatable source of permanents to sac just by playing a land. Sacing a clue with Korvold draws two cards and grows Korvold as well as Tracker. Without Korvold Tracker's clues can be a backup draw source.

A budget card that's overlooked with Korvold is Jolrael, Mwonvuli Recluse. On your turn if you draw a card with Korvold then you create a 2/2 Cat. She can be a repeatable source of Cats just by drawing a card which can be sac fodder for Korvold. She can also trigger on your opponents turns, if you draw two cards, which is good with clues and treasures with Korvold. Jolrael's activated ability can pump all your creatures especially Goblin tokens for a huge attack which can be a backup win condition with infinite mana from Dockside + Sabertooth without Korvold.

Peoni Thanks for the great suggestions. I definitely see some fun things going on with the druids like Gilt-Leaf Archdruid. I did also all the enchantments I was racking up and thought of adding some synergy there.

I see the biggest draw back to a lot of cards is Jolrael, Mwonvuli Recluse ability only triggering once per turn. So I am trying to find the proper balance to draw two cards with things like cycling to draw on everyone else's turn. So there are not many instant speed green draws or triggers that I have found yet. Your suggestion of Keen Sense did make me think of a combo with Squallmonger might be fun.

Still a work in process, but I think this will turn out fun.