Creeping Chill deals 3 damage to each opponent and you gain 3 life.

When Creeping Chill is put into your graveyard from your library, you may exile it. If you do, Creeping Chill deals 3 damage to each opponent and you gain 3 life. 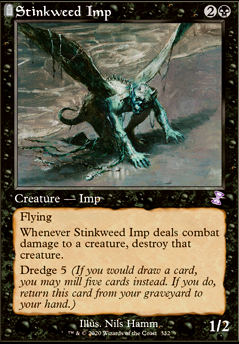 Your Soul is Mine - First Commander Deck
by OwnedbyCow 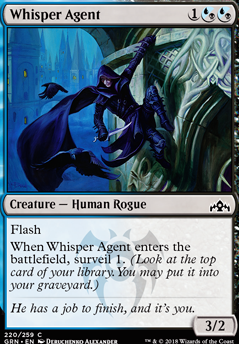 Rakdos, Lord of Demons
by Wufankitt

Lithelain Some interesting suggestions, the problem with Vengeful Strangler Â Flip is that they just sacrifice whatever you put the curse on. Accursed Witch Â Flip would work better but she is a bit more expensive at 4 CMC.

Combustible Gearhulk Is interesting but they can be a huge whiff at 6 mana if you hit lands, plus milling can rope you of much needed cards. For instance imagine if you accidently mill your needed board wipe or kill spell, especially if Killing Wave is your board wipe over Choice of Damnations as that would only do 1 damage.

Creeping Chill Would work much better in a self mill deck, something like dredge or surveil.

Hi, passing by to add my two cents as I found these cards that have similar mechanics:

Vengeful Strangler Â Flip: I like this one as it is an assured 2 hp each turn unless blocked (thus killed) and therefore attached to potentially some high value creature or planeswalker. Perhaps Basilica Screecher could be replaced/mixed with this.

Combustible Gearhulk: kinda expensive but with a similar mechanic as Sin Prodder.

Creeping Chill: good synergy with Combustible Gearhulk, but otherwise kind of bad imo (perhaps only worth ituseful against milling decks?).

Hi Saccox, I could not find any Jungle Hollow cards in my collection. It doesn't mean I don't have any, just means I couldn't find them. I am posting the decks on here as they are in real life and the way I play them. If I do find those hollow's at some point and add them, the deck here will reflect it.

I did look for Creeping Chill I do not own a copy, not sure how that is possible it being an uncommon. The next time I go to my LGS I will see if he has 4 copies and I can test it. I will add it to the maybe board and could be a strong sideboard card for certain matchups.

Hi WallofSleep, Jungle Hollow for fix the mana base? What do you think of Creeping Chill in your deck?

sergiodelrio valid concerns. The deck is definitely sort of glass-canon, where when we decide to go off then yes we really need to win very quickly. There is one copy of Nexus of Fate

so we at least survive another turn, and then you could potentially pitch it to Phantasmagorian to squeeze out one more. The deck should, however, win the same turn it combos. 4 Creeping Chill is 12 damage plus 4 hasty Vengevines adds up to 16 more damage that same turn, so 28 total. Luckily, all that damage can happen independent of the turn it flips :)

I think I am missing something. If you mill Creeping Chill, it gets exiled, so you can't use Enhanced Surveillance to bring it back.