Discard a creature card: Put a +1/+1 counter on Loleth Troll

Lotleth Troll occurrence in decks from the last year 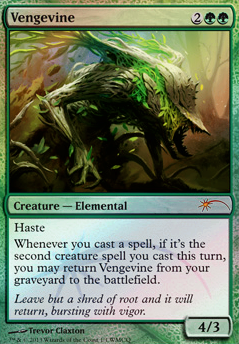 What would you do to fine tune it? I considered adding green for Lotleth Troll and Assassin's Trophy.

Hi! Fist of all I must say I'm not a Pioneer player but this list makes me want to, it looks super cool. But there's a card that it would fit perfectly in this deck, and that is Lotleth Troll! That card is super good, with all certainty better than Barkhide Troll

If there's a single weakness I see with the strategy, it's that the keyword soup just isn't thick enough. Gotta get some roux up in there. When I build an EDH deck, I like to break my 99 into 36 lands and 7 groups of 9 cards. The math is very clean, in that, by turn 4, you have a 2/3 chance of naturally drawing one of a group of 9 cards and ~1/4 to hit two or more from a group. If you apply that same principle to your creatures, you'll probably find that the odds of binning or casting and having any given keyword soup creature die are pretty low. For example, you only have 3 creatures with Menace, so you're only 27% to see one by turn 4. You have to see 21 cards out of your deck before you're greater than 50% to find a menacing creature. Obviously, if you take the 9x7 method above, that means that you need to cram 2-3 keywords together on every card to reach good odds of having a creature with 4 or more keywords. Creatures like Lotleth Troll and Sunblast Angel that convey a single, commonly found keyword would be better off as something like Banehound and more self-mill.

You confirmed my thoughts about Fauna Shaman. I felt that I needed another discard outlet besides Lotleth Troll. On your suggestion, Iâll add Stinkweed Imp and Hermit Druid. This is my first graveyard-centric deck that I plan on building, so I really appreciate the advice. Itâs funny that I have most of the painlands just sitting in a binder and Iâd think to add them. Thanks again!