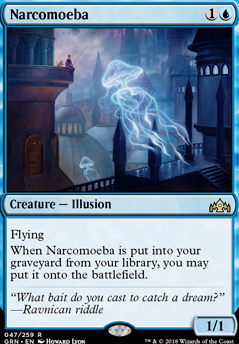 When Narcomoeba is put into your graveyard from your library, you may put it onto the battlefield.

Narcomoeba occurrence in decks from the last year 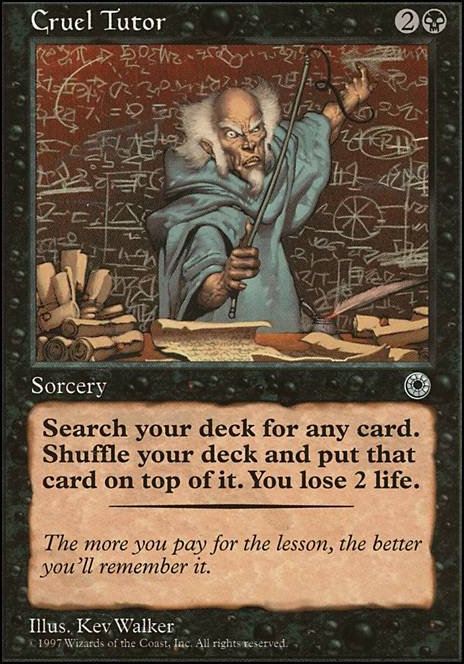 Graveyard for Breakfast
by ChatonBrutal

Thanks for the thoughtful response! Now that you mention it, adding Oracle would probably make it less of a Phoenix deck. I might take the Sultai shell here and run with that idea - been looking for a way to play a Uro deck without wasting wildcards on rotating Planeswalkers.

Last question - considered Narcomoeba? Or is that too many fragile not-good-in-hand pieces?

Gidgetimer on Is this infinite combo tournament ...

gitrog moster is non-deterministic, but because you can draw cards and sculpt your hand as you do the combo you can change the game state and it isn't slow play. The Paradox Engine loop in some pre-banning Captain Sissay decks was non-deterministic, but you could change the game state each time you did the loop until you got what you needed. This loop is on par with those, not four horseman. Attempting to win via this combo should be tournament legal.

TriusMalarky on Why is Body Double Blue ...

Planar Chaos is an explanation, but all permanent copy effects are blue, period.

I think for Planar Chaos they decided to cut the black from it's color identity as fully reasonable, as there are similar cards but they're blue and black.

Although it's not out of place at all. Blue has plenty to do with the graveyard. Narcomoeba, Snapcaster Mage and more are classic graveyard-them blue cards. Blue doesn't always deal with creatures in the grave, but when it does it's with indirect stuff like Moeba.

I think the Hermit Druid mill-your-whole-deck combo should be in here. (Mill whole deck including Narcomoeba, then unearth Fatestitcher. Then flashback Dread Return and sac Hermit Druid, Narcomoeba, and Fatestitcher, reanimating Thassa's Oracle into an empty library for the win.)