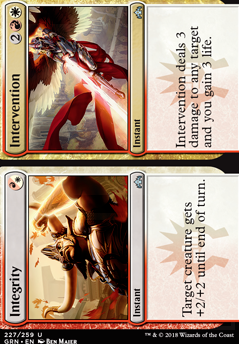 Intervention deals 3 damage to target creature, player or planeswalker and you gain 3 life.

Integrity / Intervention occurrence in decks from the last year 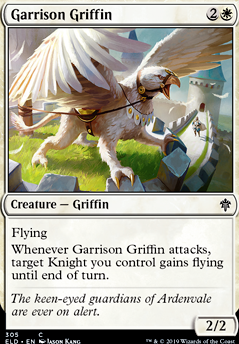 I's suggest running Fervent Champion instead of Venerated Loxodon if you are looking to get in hasty attacks. It is a great creature in multiples, and works with the Rimrock Knight . Loxodon works better with a curve full of 1 CMC creatures or token generators, and the Hero of Precinct One package doesn't produce tokens fast enough to make the Loxodon viable.

Coming with the new set, I'd suggest including Hero of the Nyxborn as a great 3 drop as it is multi-colored for Hero and applies a boost to your whole board, which is awesome with the extra combat step from Chance for Glory . Maybe it would be beneficial as a replacement for 2 copies of Integrity / Intervention and 2 lands. You probably don't need 23 in the current version as it is basically a suicide-blitz deck. The same logic applies for the split card, as you're not looking to play the 4 mana removal spell, and a 2 mana pump is pretty expensive for its effect. Additionally, maybe a Bonecrusher Giant could replace the last 2 copies?

I'm excited to see the newest version when Theros Beyond Death comes out!

FWIW, the Syr Gwyn precon deck already comes with 3 valid targets for Sunforger , but that decklist also contains absolute duds that could be replaced (like Marauder's Axe could probably be removed and replaced with a Warleader's Helix . Single Combat should be taken out of the precon too, it's so bad). For reference, those aforementioned Sunforger targets are:

The following included instants can't be searched for with Sunforger because, while the cards are anywhere but on the stack, their converted mana cost is equal to the combined costs of both halves:

So, one might probably remove Sunforger if you're not going to put in at least two to five more valid instants of CMC 4 or less.

This is definitely a good first attempt. Some suggestions though would be to cut Fight with Fire , Fire Servant , Treasure Map  Flip , Magus of the Wheel , Integrity / Intervention , Sword of the Animist , Dualcaster Mage , Fumigate , Sunbird's Invocation and Vessel of Endless Rest and swap them out for Blasphemous Act , Repercussion , Heartwarming Redemption , Mogg Maniac , Cathartic Reunion , Open the Armory , Marble Diamond , Boros Reckoner , Enlightened Tutor and Fire Diamond

I would personally go grull and run cards like Collision / Colossus and other pump. you could also run Dreadhorde Arcanist as another target of your pump spells. I would also not underestimate Maximize Velocity giving either creature a little pump and haste is great.

You could go both (Naya: green/red/white, Bant is white/green/blue) but you would need a lot of rare lands ect to get it to be reliable. However, some cards could be very good Integrity / Intervention would be great

Struyk I mean, 90% of the creatures in the deck die to Shock , but the sequence that Hero and Reinforcements allow for make up for their downsides.

thatFigureS, The scry from Samut's Sprint is nice, but the ability to throw a Lightning Helix at your opponents makes Integrity / Intervention a better option.

How do you feel about Samut's Sprint instead of Integrity / Intervention ?