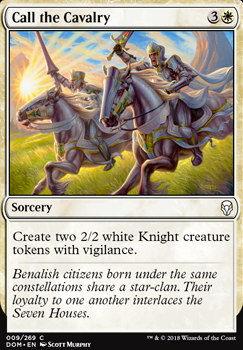 Knights of Order and Chaos
by Shergold

Gidgetimer on If i have 2 anointed ...

Using Call the Cavalry since it doesn't have variable numbers of tokens that can be made. Once Call the Cavalry resolves it will try to make 2 tokens. There are two replacement effects that need applied. Since they both do the same thing order doesn't matter. You will double the amount of tokens being made to 4 and then double it again to 8. Both replacement effects have been applied exactly once. So nothing else affects the number of tokens made and you make 8.

Phalanx Leader is an awesome go-wide strategist. Having a high creature count is how I've found to abuse him.

These are some of the token cards that I run in my PEDH.

I dropped 2 Call the Cavalry replaced them with 2 Tendershoot Dryad. Can't find a good place for Lyra Dawnbringer though. So I shoved her in the sideboard till I can.