Whenever you cast a noncreature spell, creatures you control get +1/+1 until end of turn. Untap those creatures. 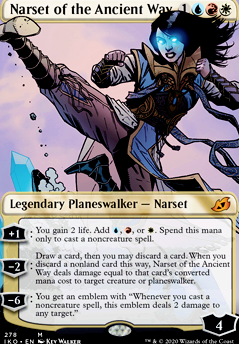 Have you considered Kyren Negotiations? For me, that card, especially coupled with Jeskai Ascendancy has killed whole tables. Just being able to tap the spirits before I use them for mana and then get damage through? It has been delicious.

The Wings of War

gavriel1136 - It definitely could be good enough. While a lot of my individual threats don't begin as large enough power where the extra damage (mainly provided by granting the equipped creature double strike) is that significant, there are probably sufficient ways to boost them up that it could be worthwhile. Cathars' Crusade, Jeskai Ascendancy, and Shared Animosity can each make even small creatures scary threats, and some creatures also have prowess which can turn them into much larger threats. That being said, I would need to find a cut. I think a likely candidate is Primal Amulet Â Flip. The card has felt kind of slow and clunky in this deck. In addition, the four-drop slot is way too crowded right now in this list, so this would help relieve some of the pressure on that slot.