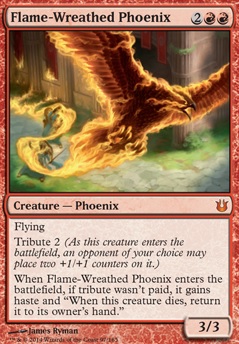 Purphoros, God of Pinging
by BreadKing 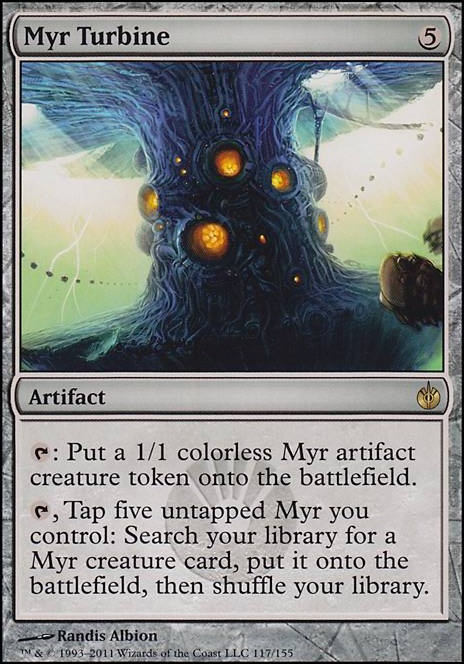 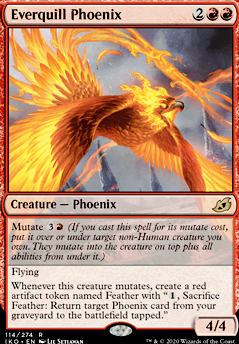 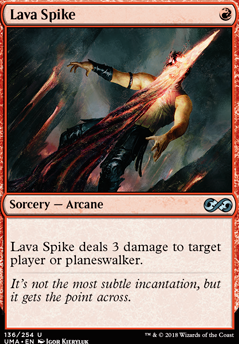 What's Yours Is Also Mine
by ats7

Argy lol that's exactly how I feel about Flame-Wreathed Phoenix in my Cube -- I kick myself for having including it when I make the wrong tribute choice. Why didn't I just slot in Inferno Titan???

Maybe it's a testament to WotC's design process that we can think of relatively few recent mechanics that haven't worked in either Limited or Constructed. And the ones that have failed (Support, Meld), I've noticed that MaRo and R&D are very cognizant of why they didn't work. RIX, for example, was a great set from a mechanics design standpoint. Ascend (while annoying) wasn't too bad, and there were very few other mechanics introduced (we still had Treasure, Raid, Enrage, etc). All of which address some of the issues we've discussed in terms of strong mechanical designs.

Thanks for the fun conversation, everybody! Cheers!

From what you said Ascend works. It's just annoying because it is effective.

As for Tribute, it may give your Opponent choices, but if the choices are both bad for your Opponent, that is a good thing.

There's almost nothing I like better than watching my Opponent agonise over whether or not to pay Tribute to Flame-Wreathed Phoenix.

I also LOVE the flavour that they must physically place Counters on the Creature, to pay Tribute.

Again, though, that's just my take. You may not have ever played against someone like me who can make those mechanics work.

Homura, Human Ascendant slams down for four; and when you sac it to Tooth and Claw, it will give allow your other creatures to pump Warstorm Surge's effect by two. Then a 4/3 Norin the Wary will be blinking out and popping in 3/3 Myrs from Genesis Chamber!

I toyed with this recursion theme in my Phoenix deck. I would especially recommend Ashcloud Phoenix, Flame-Wreathed Phoenix, and Rekindling Phoenix.

I hope The Immortal Sun and Skullclamp are enough card draws for you; but if not, you can always go with Reforge the Soul.

wereotter on Interaction between Marchesa the Black â¦

In this scenario, I have a Flame-Wreathed Phoenix in play and tribute was not paid for it, giving it the return to hand ability. Let's say I also have Marchesa, the Black Rose giving it dethrone. I attack the player with the highest life giving it a +1/+1 counter, and it later dies while Marchesa is still in play.

I now have two triggers, one to return the phoenix to my hand from its own ability, and one to return it to the field from Marchesa. Can I stack my triggers in such a way that it returns directly to play rather than my hand, or once it hits the field will it's own ability resolve returning it to my hand anyway?

After taking a look at your deck and some others I changed mine around to mono-red.

The win-con with mine is simple: blow up opponent's land early with a Simian Spirit Guide, Darksteel Citadel, Boom/Bust combo and continue the land oppression going forward by using the plethora of copy spells I have through Dualcaster Mage and Pyromancer's Goggles while simultaneously building a strong board presence with Flame-Wreathed Phoenix and Shivan Wumpus.

I may remove Thermo-Alchemist for Ember Swallower or possible 2x Chandra, the Firebrand for more copy and 1x Koth of the Hammer.

Honestly, you probably need some kind of power booster for the phoenixes. A lot of them are weak and somewhat mana heavy to bring back. Flamewake Phoenix I would try to put to four because that is the easiest one to continuously recur. I like Chandra's Phoenix because she is also somewhat easy to bring back, especially if you replace Pyroclasm with Earthquake. I'm not so sure I like Skred in here since it can only damage creatures. Maybe just a whole bunch of burn spells in its place? Also, while I have a deep love for Obsidian Fireheart (he is one of my favorite all time arts), he seems pretty out of place here. For that mana, maybe consider Flame-Wreathed Phoenix since you'll either get the return ability or a 5/5 beater.