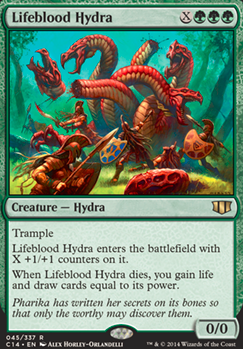 Lifeblood Hydra enters the battlefield with X +1/+1 counters on it.

When Lifeblood Hydra dies, you gain life and draw cards equal to its power. 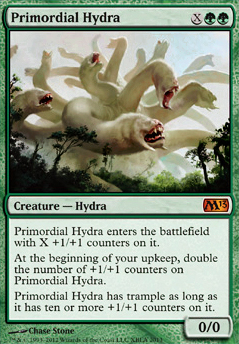 Â Â Â Â Â TheMeadiator: Thanks for the suggestions and upvote! It does tend to pop off pretty quick haha, with reasonably good recovery from wipes and no reliance on any one strategy to find a win. =)

Â Â Â Â Â I really resonate with a lot of your suggestions! Wurmcoil Engine is one of my favourite cards (full stop haha) and originally had included Phyrexian Altar and Ashnod's Altar in the build with this type of token generation in mind. In the end I opted to play more around effects that produced tokens as a result of gaining life or instant speed activation. Alas, a great seller of the wurms is their wipe protection, something I was conscious of when veering away from that strategy, and included Hangarback Walker and Lifeblood Hydra for that kind of coverage. :)

Â Â Â Â Â Heroic Intervention is maybe my only hard disagree. It can save my other permanents from removal and wipes for one less mana, so in that regard I consider it to be integral to the deck. However I've been seriously considering cutting Unbreakable Formation in favour of Rootborn Defenses if I can't find a way to include all three of them lol.

Â Â Â Â Â Aura Mutation with Divine Visitation and/or Parallel Lives/Anointed Procession/Doubling Season is pretty nutty, and I highly recommend haha! I had originally cut Sundering Growth for Aura Mutation haha though I was thinking about cutting Aura Shards (less likely) or Dismantling Wave to put it back in.

Â Â Â Â Â Sorry to hit you with the wall of text haha, great suggestions and thanks again! =)

FounderX Awesome suggestions! Thanks so much for the advice! Just ordered most of these from my LGS so I can make a few revisions this weekend. Gonna pull the Wave effects and maybe a Domri for Rhythm of the Wild . Lifeblood Hydra is spicy and definitely going in. â¡

Hi tiffanyann, Doubling Cube has a reprint now, it is on The List since AFR, and is way more affordable now. I miss a few good draw spells, like Rishkar's Expertise (reprinted in AFR Commander), Return of the Wildspeaker or perhaps Shamanic Revelation, the latter might not be the best choice, better in token heavy decks. Lifeblood Hydra is both an X-cost Hydra and a big draw die trigger. For static draw you could also go for Colossal Majesty or Elemental Bond. Also, I see, you don't run a lot of recursions, Bala Ged Recovery Â Flip, Reap the Past, Eternal Witness, Wildest Dreams and my personal favorite card, Praetor's Counsel, after a board wipe, you might be in trouble rebuilding. A card that has to go in your list is Rhythm of the Wild, it protects your big hydras from being countered, and you'll probably want to give them Haste to swing in. Another auto include is Garruk's Uprising, draw on ETB, Trample for your big creatures, and draw for Hydra power ETB. I'm not the biggest fan of "Genesis Wave" effects, I see you run a few of those. Digging for creatures might draw you into X-cost creatures, they enter as 0/0 and die immediately. Happy Brewing.

Does Elemental Bond count creatures that enter with +1/+1 counters ( Lifeblood Hydra , Hungering Hydra , those types of cards]] ) as having the power from gained from those +1/+1 counters, or as having 0 power (the power on the card)?

There's not a lot of thematic overlap, but Hydras are often paired with Elves because they can take advantage of every bit of mana Elves can create. They're also big and stompy. Highlights include Mistcutter Hydra , Managorger Hydra , Lifeblood Hydra , Genesis Hydra etc.

Neotrup on Can Hibernations End find a â¦

No, it will matter how many age counters you are at. With Hibernation's End you'll need to find a creature with exactly that converted mana cost, so if there are 3 age counters you can find Lifeblood Hydra which will come in with 0 counters, but at 4 age counters you will not be able to find it. In all zones other than the stack, X=0.

So, there are several things you have misunderstood when looking at this deck, as it's one I have played and tweaked for the better part of a decade now and am very happy with it's current state. Firstly, the danger of Xenagos really kicks in when you can actually pressure an opponent, so it's best to stick with either trample or flying creatures exclusively, with the few exceptions of those that will really buff and support you such as Birds of Paradise and Oracle of Mul Daya. I chose to go with flyers, the best of which are largely dragons, because people generally do not have many fliers and are not prepared to deal with the power and pressure of many massive fliers suddenly appearing and swinging at them. As for the rest of the suggestions you have, and the part you misunderstood with him, is that you're focused on making more of a midgame and a recovery so you don't falter due to lack of cards. However, Xenagos doesn't really care of need that. Xenagos needs to get to 5 mana and get a single dragon out. One dragon. Then you are immediately swinging for at least 10 if not more, and every dragon has abilities and triggers that further pressures your opponent(s).

Greater Good is a fantastic card, but there are very few times that you want to be sacrificing your creatures since you will always be a massive target since Xenagos is always a threat. The same goes for Life's Legacy and Momentous Fall.

The problem with cards such as Return of the Wildspeaker, Harmonize, and Bonders' Enclave is that they take up most of your turn to draw cards. I have found that as a true gruul deck you don't want to let off the pressure on your opponents. You very rarely need more than a few dragons over the course of the game as Xenagos puts so much pressure on through doubling them and haste that losing an entire turn to draw more cards is a waste. I make an exception for Rishkar's Expertise because it does still allow us to drop a card and keep the momentum going.

Elder Gargaroth is indeed a good card, but it runs into the problem that it's effects aren't good enough for the deck. He is focused on the additional utility abilities, being lifegain, token generation, and drawing a card, which in any other deck are fantastic abilities. But here he doesn't put pressure onto your opponents the way cards such as Terror of the Peaks does. Everything about Xenagos is speed and pressure. You also run into the issue of him dying. With most opponents fielding very few flying and reach creatures when compared with the number of them in this deck, you rarely need to worry about your dragons dying. Every turn your board keeps building and the dragons have such destructive abilities (see Balefire Dragon for an example of such) that they have trouble keeping a strong board presence and fighting back. But all they need is one small deathtoucher, or any pump spell on one of their ground creatures and they stop your momentum. However, they will rarely have enough fliers to do that. That's a big part of the reason why we run so many dragons. Direct damage to your oppoenent, destructive effects to their boardstate (ex. Tyrant's Familiar), and constant psychological pressure and panic setting in. This is the way of the gruul.

Lifeblood Hydra is too slow. You need at least 8 mana to make him even a little viable, which is too much and too slow. My 8 drops are either extremely powerful, Utvara Hellkite for example, or i'm dropping a 6 drop and holding up a Heroic Intervention or something of that sort.

The Great Henge is also a great card, but again it's too slow.

Berserk is okay, but I prefer my creatures staying alive and pressuring on further turns.

Kessig Wolf Run Honestly just not good enough. The trample is largely unnecessary, and it eats up a minimum of 3 mana to have any effect, mana that can better be spent elsewhere.

Deflecting Swat Amazing card, but very rarely are cards single targeted any more, at least in my meta. Board wipes are more common.

Ilharg, the Raze-Boar Rather than this, I can just have another dragon which would do much more for my deck.

Sensei's Divining Top Another amazing card, but it just doesn't do enough in this deck.

Now, regarding the high CMC of the deck, of course it's going to be high. We're rushing out to 6 mana and then aggroing out from there. This deck doesn't look to play tempo with a whole bunch of smaller cards being played and set up. That takes too long and allows midrange and late game decks to set up too much. This deck is trying to ramp out and attack.

Finally, I have no idea which creatures you are viewing as subpar. The creatures in this deck are exclusively either flying to attack and pressure my opponents, or ramp/dorks to accelerate the deck, or protection in the form of Archetype of Endurance. If you would be willing to expound on that statement i'm curious to hear your opinion on which creatures could be better utilized.

I will say this, all of those suggestions are great and i'm always really happy to hear and see other people's thoughts on improving things. Other than Berserk and Ilharg, the Raze-Boar I have actually run every single one of those cards in this deck at one point or another. However, though many years and a lot of experience with him, this build is what I have found to be the most powerful and reliable one.