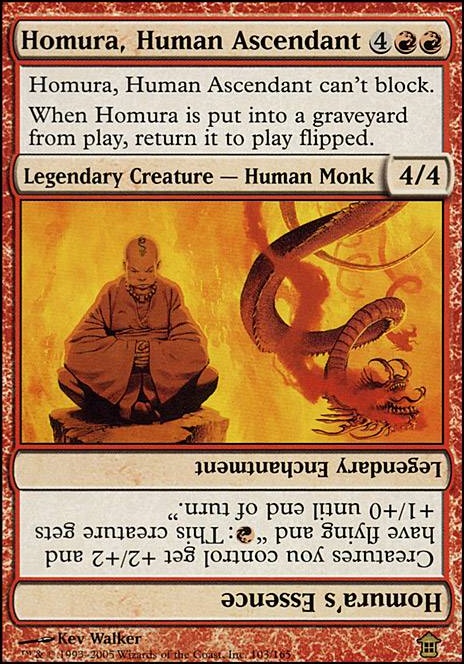 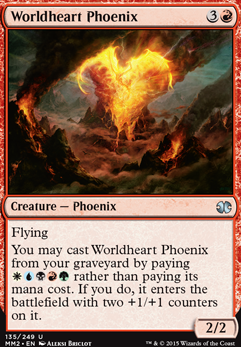 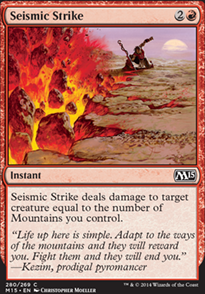 So You Wanna Breathe Fire?
by BustinKappas 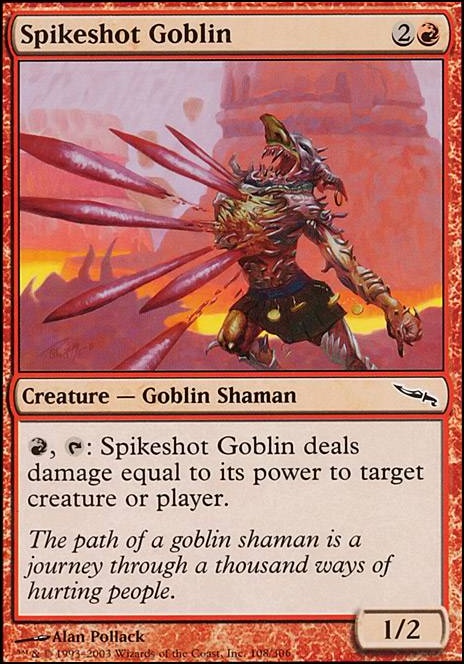 Homura, the Dragon Matyr
by SnowLeo 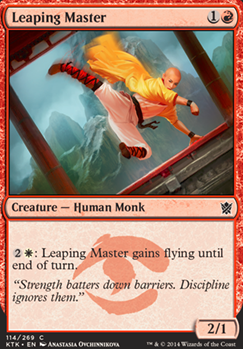 Ragavan, Boatswain of the Dragon's Smile
by 1empyrean

Thanks for your questions! Regarding Warstorm Surge , Where Ancients Tread and Electropotence : Those are expensive "win-more" cards and you can play only so many of them and I chose to play with Fiery Emancipation (and to a certain degree Homura, Human Ascendant Â Flip). Fiery Emancipation fits better with the gameplan of this deck (right before your turn, you cheat several creatures into play and in your beginning turn you just slam Fiery Emancipation and hope to win). This is not possible with Warstorm Surge and Where Ancients Tread. Those two enchanments need to be played first to have an effect thus telegraphing your opponents that you just entered the "From now on, my game actions are more explosive, so save all your interactions for me" gamestate. This is not good, this deck wins by choosing the right time to battle without your opponents knowing how much damage you can pull off. Electropotence seems even worse as you need extra 2R.

Homura, Human Ascendant Â Flip has really suprised me and with the recent additions from Stryxhaven ( Triplicate Titan ) I plan to further play with this "win-more" card. This decklist has a subtle "go wide" theme regarding tokens so Homura fits very well, Homura's continous abilities seem on the first glance weak compared to the potential damage output of Warstorm Surge. However, while warstorm surge triggers only once for each creature, Homura's pumps your team by +2/+2, grants flying (do not underestimate flying; flying - in a sense - can accomplish the same damage output warstorm surge would do, for example in the not-so-rare cases in which your non-evasive threats like Etali, Phyrexian Triniform, Wurmcoil Engine etc cannot connect to your opponents because of ground blocker, with flying and that +2/+2 your creatures would even do more damage by connecting than they would do with warstorm surge and not being able to connect) AND shivan breath ability thus turning a every single creature (even 1/1's) of yours into very deadly threats. In the long run, Homura's damage output is at least the same but I feel the ceiling is way higher for the reasons I just stated :D Dont get me wrong, both enchantments you were suggesting obviously fit very well in what Purphy B. does and you should definetly play them, if you want to. But for me and the philosophy/gameplan of this deck, they just dont work that well :)

Braid of Fire . I tried that one, it looks good on paper, you generate more and more mana every turn and you could even use that mana. But to properly use that mana in your upkeep, you need to actually cheat your dudes into play during your turn. This very thing (cheating the fatties into play during my turn) is something that this deck only does, when I go for the alphastriking win (pass the turn with open mana, cheat stuff into play just before my turn and then drop even more fatties during my turn). In all other cases, where I do not want to alphastrike, it is usually better to be reactive and not proactive by passing with open mana and cheating the creatures into play just before my turn. My point is: Braids of Fire is only relevant for those alphastriking turns, at least for my playstyle, and the times I alphastrike should preferentially be only once during my games. Thats why I passed on that one.

Another point worth considering: It is usually better to use your card slots for cards that provide value in form of extra cards, not extra mana (to add on that: Our commander already provides a huge discount on mana by cheating fatties). Being monored means, we dont have that many tools of getting extra cards. There are a lot of games, where I just dont draw my wheels even though I play many of them. My hand in those games is usally quite empty and having braids of fire is then extra bad, because I dont have the cards to use that mana for. This is why I would strongly recommend playing cards that actually give you more cards, e.g. more wheel effects instead of Braid of Fire, or interactive cards ;)

It got a bit lengthy, woopsie

I have a decent Phoenix deck for my playgroups power level. some cards i have are..

Thermopod - Sac your phoenixes to this to get some mana Thunderous Might - Phoenixes has alot of devotion so whatever you put this on will be massive Homura, Human Ascendant Â Flip My commander of my deck he makes my other creatures that are not phoenixes into basically phoeinxes

check out my deck for some more tips https://tappedout.net/mtg-decks/homura-phoenix-ascendant-1/

Smash and die for your God!

If you are choosing only from the ones you have listed I suppose Homura, Human Ascendant would be most on theme for the deck. Although I think Neheb, Dreadhorde Champion would be a better mono red option.

I have the 99 but i can't think of a good or even decent commander. I was thinking of Homura, Human Ascendant , Torbran, Thane of Red Fell , Jiwari, the Earth Aflame , Neheb, the Eternal , or Purphoros, God of the Forge