Creatures with +1/+1 counters on them can't be blocked. 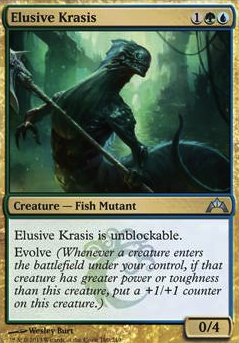 Herald of Secret Streams can help enable your victory by making your X/X creatures unblockable.

Have you considered Toxic Deluge for a cheap boardwipe? Also Herald of Secret Streams is great in this deck! In addition, Kinnan, Bonder Prodigy allows you to really up your Mana production.

Thanks for the considerate response. After reading I do think I will take this route and change my Animar deck to hydra tribal while changing Gargos to voltron, though I'll probably put him into new Animar as well. I look forward to building and eventually playtesting this new version that kind of mashes together my two favorite decks. I'm combing through my decks on the site to find some extra includes and a couple cards you might like are Kiora's Follower, Altered Ego, The Great Henge, Shaman of the Great Hunt, and especially Herald of Secret Streams. Anyways thanks again and I might come back in a while if I find more cool stuff you don't have or for gameplay advice once I put this together.

I used to play Ghave in a similar fashion but found myself being targeted nonstop thanks to Ghave's reputation. If that ever becomes a problem, consider Reyhan, Last of the Abzan

at the helm instead to help float under the radar.