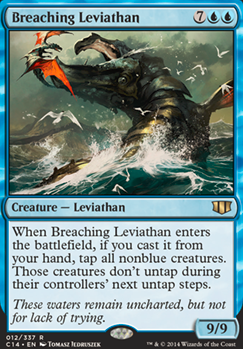 When Breaching Leviathan enters the battlefield, if you cast it from your hand, tap all nonblue creatures. Those creatures don't untap during their controllers' next untap steps.

Breaching Leviathan occurrence in decks from the last year 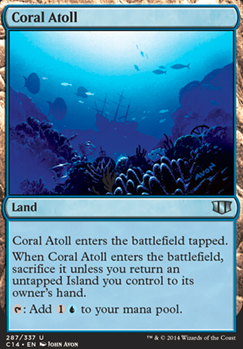 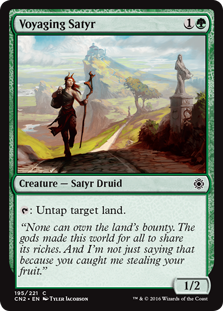 discipleofgary73 Great Whale is gas, was perfect back before they printed 'rix and the commander was Taniwha . Played High Tide , Conjurer's Closet , Nim Deathmantle you mentioned and super stupid stuff like Sky Swallower + Soul Foundry + Donate + Mindslaver . Sadly Breaching Leviathan and Slinn Shady don't trigger on flickering... but I'll try fitting the whale back in :)

I just got around to ordering this list last week, though I'm still waiting on Alexi, Zephyr Mage, Breaching Leviathan, Dragon Wings, Ensnare, Millikin, Scourge of Fleets and Sky Diamond.

Instead, for bodies I've decided to use alot of draw in the form of Arcanis the Omnipotent, Azami, Lady of Scrolls, Kefnet the Mindful and to make up for the major loss in disruption (somewhat) Tidespout Tyrant. Commander's Sphere is slightly slower but makes a fine rock that comes in untapped and Gridlock and Aqueous Form to keep a consistent Instant and Enchantment count while still getting the job done. After a few test hands it seems to work out, so I'm looking forward to subbing them in when necessary even after i get the correct cards.

Sorry for the long comment, as it was mostly for me. I'm pretty new around here, but I think the draw creatures at least could be useful and potentially make room for other switches.

Breaching Leviathan Doesn't work because you arent casting it

As I referenced in the forum post, Eerie Interlude, Momentary Blink, and Panharmonicon would slide nicely into this deck. Ephara, God of the Polis is a good draw engine for a blink deck. Conjurer's Closet is another all-star in flicker decks.

For what to cut, I would say Preordain and Resurrection are good cards, but don't have any synergy with everything else. Breaching Leviathan is a cast trigger, so I might cut it since you have a good amount of top-end anyway.

I whish that Breaching Leviathan would work with polymorph and flicker effects :)

Fun deck. I'd give Stormtide Leviathan a look though. Arguably the best cheap blue fatty from the sea. Also if looking to spend a bit more, you could roll the queen of the seas herself in Thassa, God of the Sea. Other notable blue fattys include Breaching Leviathan, Aethersquall Ancient, Deep-Sea Kraken, Stormsurge Kraken, and Serpent of the Endless Sea. I'd give some of these a look if you are looking for a bit more hitting power on the cheap as all of them are less that a dollar bit hit super hard. Stormsurge Kraken in particular is great for it's card draw ability and hexproof.