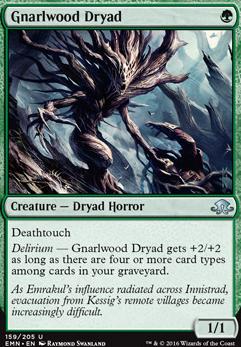 Delirium - Gnarlwood Dryad gets +2/+2 as long as there are four or more card types among cards in your graveyard. 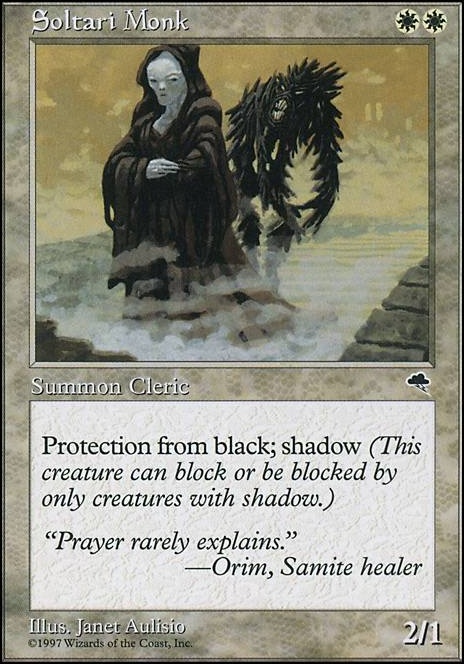 Feels good to be Delirious (Pioneer)
by saber4734

Thanks for the feedback! I definitely agree with you on the mana cost for my creatures. Adjusted the deck to remove Poison-Tip Archer, 1 Xathrid Gorgon and 2 Sword of Vengeance. In return I added 2 Gnarlwood Dryad and 2 Rancor.

Rancor definitely helps pump the creatures more and hopefully Gnarlwood is a cheap 1/1 w/ an occasional option as a 3/3.

Vivien's Arkbow and Lifecrafter's Bestiary can give some additional needed search/card selection to keep the flow of creatures coming.

Voracious Hydra can be some creature removal on a stick. And you may have enough hydras to make it worth running Gargos, Vicious Watcher. The CMC discount combined with your commander's should make some pretty big hydras. YMMV though.

Not sure how fast Aetherflux Reservoir will play in this deck. Its usually better in a deck that casts a lot of cheap instants all in the same turn to go off. If you're just looking for more lifegain, Thragtusk may be an option or maybe Ravenous Baloth [the Garruks produce enough 3/3's to feed this].

If you're looking to keep a 1/1 deathtouch in the deck, Gnarlwood Dryad is an upgrade to the snake as it at least has the potential to grow on its own.

Land count seems a bit low here as well. I'd up the count some or at least get a couple more of the cheaper ramp spells in there, Nature's Lore or if you have some snow forests Into the North plus maybe add Wayfarer's Bauble

I also think you will want an Overrun type effect in here as a finisher. Return of the Wildspeaker could get subbed in for Hunter's Prowess or some such. Sadly it lacks trample but has the flexibility to buff or draw cards.

Nimble Mongoose instead of Gnarlwood Dryad ? You have enough fetches and graveyard dumping cards for it.

Hey, just read your comment on my primer. I'd love to give some advice, though without knowing what direction you want to take with the deck, I'll just start with some general thoughts on the deck.

I really like some of the cheap interactive cards you're running. In particular, I like the idea of running a cheap deathtoucher in Gnarlwood Dryad to completely shut down creatures coming your way. I do think there may be better options for that slot, but I definitely like including something along those lines in the deck.

I think you probably want to find room for 3-4 more lands. Muldrotha is a very mana hungry commander, and you've got some expensive finishers in the deck to boot. I get it, lands aren't all that exciting, but if you miss a land drop playing Muldrotha, you're not going to have a very good time.

You've got a lot of great cheap and efficient cards in your noncreature slots, but you have a bunch of creatures that feel very expensive for what they do. Acid Web Spider and Noxious Dragon both fill important roles, but cost tons of mana, making it really hard to make use of them effectively. I would look for some cheaper creatures that fill similar roles. Manglehorn can not only take care of any artifact, it also can significantly weaken opposing mana rocks. Plaguecrafter is a great way to get rid of hexproof/shroud/indestructible creatures, and also lets you get creatures into your graveyard so you can replay them.

In a similar vein, I have really enjoyed reanimation enchantments in my Muldrotha. I'm not sure what your budget is, but Dance of the Dead , Animate Dead , and Necromancy have performed incredibly well for me. They let you get extra creature plays from your graveyard, help keep Muldrotha on the field, or cheat out giant creatures for cheap. I especially like them here because of Final Parting , which lets you tutor a reanimation spell and a reanimation target, letting you tutor and play any creature from your deck for 7 mana.

Finally, I really like all my self-mill pieces to do more than just fill my graveyard. While its all well and good to have a stocked graveyard, you can't neglect your hand, just in case you can't stick Muldrotha or your graveyard gets removed. For this reason, I really like things like Vessel of Nascency , Satyr Wayfinder , and Perpetual Timepiece . You've got a couple of the best options for this ( World Shaper , Sidisi, Brood Tyrant ), but you also have a bunch of cards that do nothing besides dump cards into the grave.