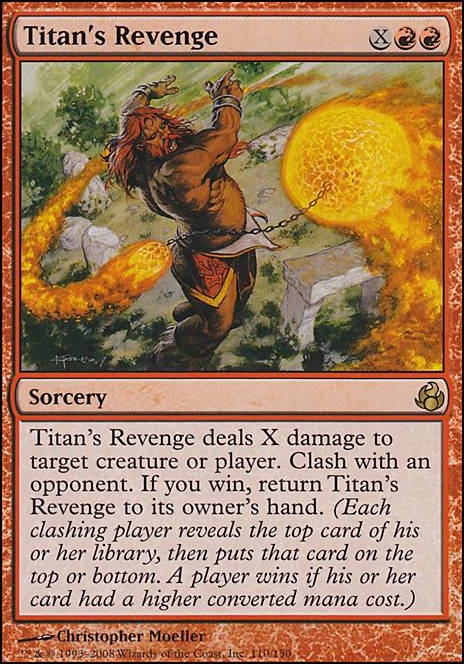 Titan's Revenge deals X damage to target creature or player. Clash with an opponent. If you win, return Titan's Revenge to its owner's hand. (Each clashing player reveals the top card of his or her library, then puts that card on the top or bottom. A player wins if his or her card had a higher converted mana cost.)

Riku and his copy casts
by padjin 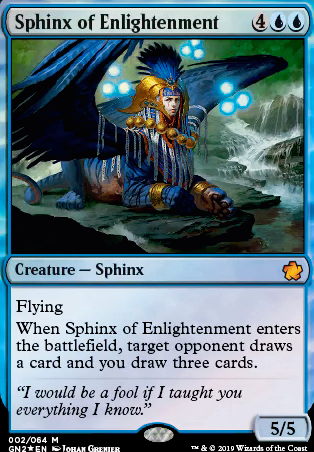 [Rakdos, Lord of Riots] The Truth in Anarchy
by Propellinator 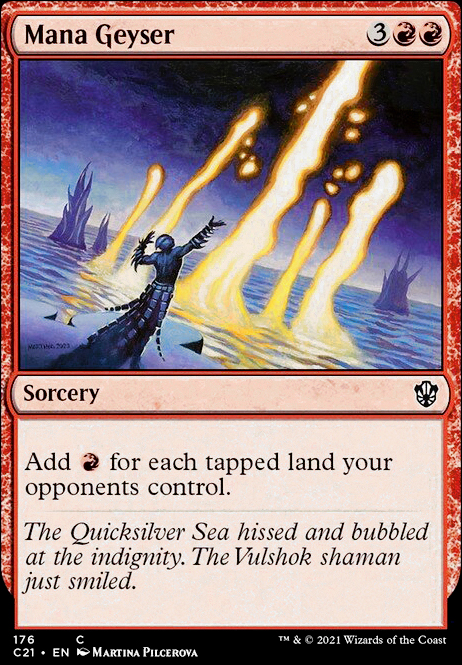 The ORIGINAL Ashling the Pilgrim EDH (2020 Update)
by Nefashu

IF You really want to make Burn viable i9n EDH, there are two options.

First is going into Storm, but I don't really like it, and I won't really be able to help you here.

Other option is goin for big X spells. This is what I like and what I know well. Banefire, Devil's Play, Fault Line, Titan's Revenge, Rolling Earthquake. But hey, You need mana for that. You already have Mizzix of the Izmagnus that lower their costs. Another must have is Mana Geyser and Mana Seism imo. Both gives You so much quick mana in mid-late game that it lets you to burn everyone. Another cards are all kinds of copy spells like Fork, Reverberate and Reiterate. Double burn? Nice. Now damage doublers which are Fire Servant, Furnace of Rath and Dictate of the Twin Gods.

There are more viable cards to write down, it will be simpler for you to check my Ignite your Planeswalker spark.

Titan's Revenge (can be used multiple times and sort of scrys).

Uba Mask (If I can't draw cards then you can't either - also makes your wheels kind of fucked up brutal).

I would remove Black Sun's Zenith, since if you use your general to cast it it kills Rosheen. I would replace with one sided wraths like: Bonfire of the Damned

Indomitable Creativity --> By Force removes the artifact polymoprh unless you use that on your own artifacts.

Titan's Revenge might be a good addition to the deck.

Nice deck, I'm a big fan of Shu Yun, I feel like he exemplifies the balance between creatures and non-creature spells with his abilities, which can definitely be difficult to maintain.

The following are rare burn spells that can return themselves to your hand for multiple times casting, so you can trigger Prowess and Shu Yun's second ability multiple times each: Cerebral Eruption, Hammer of Bogardan, Pulse of the Forge, Rekindled Flame, Titan's Revenge, and Volcanic Vision.

Umbilicus/Blood Clock allows you to return low CMC artifacts and enchantments to your hand on each of your upkeeps, so that you can cast them again to trigger Shu Yun's abilities, while also making your opponents lose life if they don't return permanents to their hands during their upkeeps.

Just a few suggestions:
- Mycosynth Lattice + Herald of Kozilek combo.
- Sphinx-Bone Wand: Free pings?
- Then a Sphinx-Bone Wand + Mystic Speculation + Memory Crystal + Omniscience/Some other form of infinite mana = Kill All Combo
- Radiate: I have seen some combos with this card that is utterly horrifying. I had one friend do Radiate + Chaos Warp
- Fork: From what I have read on the rules, and feel free to correct me if I'm wrong, is that this actually copies the spell identically. X costs paid, kickers paid, storm, etc when you use this to copy.
- Chandra, the Firebrand: Not the best card, but it's at least a one time copy spell.
- Tezzeret's Gambit: Draw and proliferate?? Yes please.
- Volcanic Awakening: If you really want to be that guy...
- Grapeshot/Titan's Revenge/Ignite Memories: Need more burn imho, but that's just me.

Just a few suggestions. Let me know what you think!