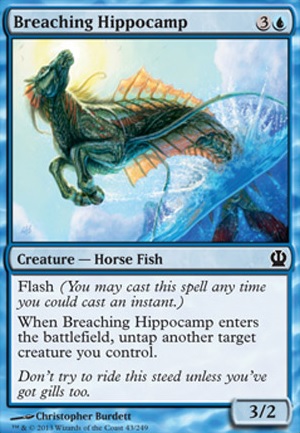 Flash When Breaching Hippocamp enters the battlefield, untap another target creature you control.

Zwolfe64 as has been said, for consistency, but also because you need to have certain cards inside the deck itself. if you end up with two Breaching Hippocamp in hand, for example, you'll not be able to perform the combo.

Weavers of Lore and Ley

On the one hand: I'm excited to see Huddle Up in more decks than just mine.

On the other hand: it's objectively a bad card and probably shouldn't be in a deck unless you're trying to lean into group hug.

Consider Pestermite or Breaching Hippocamp instead, which offer more ways to go infinite with Displace/Flicker.

I am not used to pod decks though and I am struggling to get my head round the end of the combo.

At the end I think you have:

I'm sure I'm missing something, could you point out to what it is?