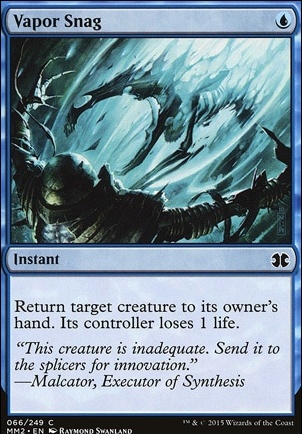 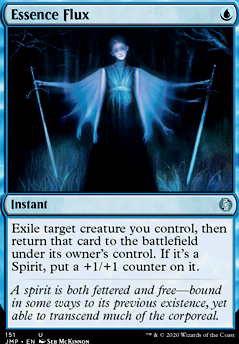 For Assholes Only
by Yolo_Von_Bieberswag 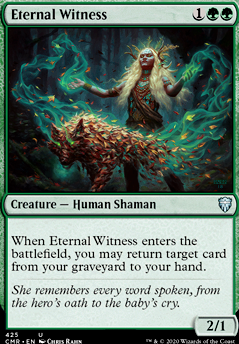 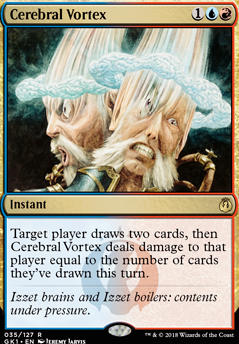 Counterspell is a pretty big upgrade over Mana Leak if you can handle the mana requirements, which I think your deck can. Additionally I think Remand is probably better than Unsubstantiate and does more or less the same thing. I would also recommend going up to 4 copies of Supreme Phantom , perhaps dropping a Vapor Snag for it. I like it!

Try to cut down the number of 1x cards and add more copies of your key cards. For example, switching Vapor Snag for another Azorius Charm makes it more likely you'll draw the Charm. The Charm offers more utility and versatility, and the bounce effect is similar enough that you're not losing too much. That 1 extra damage will be overshadowed by your attackers. Similarly, Reef Worm makes a big token, but it takes a while to get there. Also, if you expect to see a lot, that 9/9 token probably has a very short lifespan. Switch Reef Worm out for maybe another Serra Angel .

Dispel has a very low mana cost, but unless you see instants all day every day, it has fairly limited utility. Look at Negate as a potential replacement, and move Dispel to the sideboard.

Another, somewhat higher-budget suggestion, if you want to be really annoying, is Isochron Scepter . If you imprint a Silence or Azorius Charm on it, you can cast that spell each turn, locking your opponent out or finding exactly the effect you need. Any of your other 1- or 2-cost instants would also work well.(Disclaimer: This isn't the most fun to play against, so do this only if you're willing to basically shut down a game: Isochron Scepter + Silence basically says "Target player can't cast spells for the rest of the game." If your friend is okay with this, go for it.)

Alright, I've reconfigured things a bit. I got rid of the Familiar's Ruse (which has been so good for me for so long) as well as Vapor Snag . This let me beef up on Faeries, increasing the total to 30. The potentially reusable Brazen Borrower x3 gives me the ability to bounce their stuff, while Quickling x4 and Faerie Impostor x3 to bounce mine. Vapor Snag is more versatile than Faerie Impostor , but being able to add in more 2-power flyers for only one mana each really helps with the clock, and this deck benefits from having as many faeries as possible on the board.

Mana Leak , Counterspell and Spellstutter Sprite gives me 12 counterspells, potentially more since the sprite can be reused. I also threw in an additional Island to bring me to 22 lands total.

I hadn't realized that it was going to be re-printed. Interesting quandary - on the surface I'd say yes, I'd replace Mana Leak , but I'm also looking at Opt and Vapor Snag as potential replacements. That bounce IS a significant benefit, don't want to discount it, and with the Mutavault I need to be aware of the double blue cost.

I think you're right about Jace, Architect of Thought and I will test some other stuff in this place.

Search for Azcanta Â Flip is great and I want to try this card for a long time, maybe the time has come now.

I love Thing in the Ice Â Flip, but I already play it in my Izzet Control-list and because of this, I want to try Elspeth here.

4x Springleaf Drum > 4x Stonybrook Banneret : It seems your curve is mostly 2 drops. This change will smooth out your curve. Plus, the Drum synergizes with Judge of Currents .

2x Judge of Currents + 2x Renegade Freighter > 4x Wavecrash Triton : The only cards I see that synergize with Triton are Vapor Snag and Fall from Favor . Prooobably not what you want to be doing. These two replacements will offer you a wincon, as well as the full tappy package.