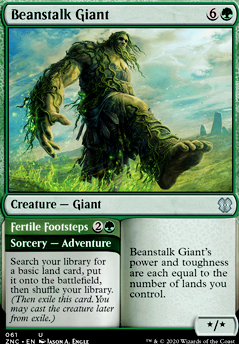 Beanstalk Giant's power and toughness are each equal to the number of lands you control.

(Example scenarios for Fertile Footsteps| You may cast this off of Melek, Izzet Paragon. You may not target this with Snapcaster Mage. Thalia, Guardian of Thraben increases the cost of this. Electrodominance requires X=3. If your opponent owns this and you cast it, you may cast their Beanstalk Giant from exile. You can cast this from a cascade spell if the spell has a cost greater than Beanstalk Giant's cost.) 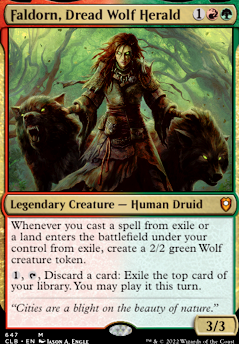 I have an Omnath, Locus of the Storm deck that seeks to storm off by playing mana doublers and then play cards that become mana positive by that. With Nyxbloom Ancient in play, Skyshroud Claim becomes a ritual. This card could become one too, if you'd add another thing like Zendikar Resurgent. In that deck, I would play Untamed Wilds over Cultivate, probably. But I already play Beanstalk Giant there, and Search for Tomorrow, which are strict upgrades over Untamed Wilds in most green decks.

Beanstalk Giant does the very same thing, yet it brings a big creature to the table as well. I'd always play that over Untamed Wilds

griffstick on Blowing Stuff Up

For 5 mana Wrenn and Seven equals

Feed the Pack gives you a sac outlet, Master of the Feast can give ya a cheap early threat. Footbottom Feast can pull juicy tidbits from your graveyard, and Beanstalk Giant, Everflowing Chalice and Explosive Vegetation can help you ramp. Fresh Meat takes advantage of graveyard shenanigans. Hot Soup seems like a must include in this deck. Fruit of the First Tree will get you life and card draw. Just a few ideas for you, Iâm a total sucker for theme decks, I love it! Just a shame Chef's Kiss isnât in the color identity. Love the deck.

On an Adventure! (Temur adventure)

Thanks kenvan19! Appreciate the kind words! Yes it can escalate quickly when you ramp with Beanstalk Giant's adventure! Youâre pretty much able to cast anything you have in your hand, with the added value of the doubling effect of Lucky Clover. Lots of fun! 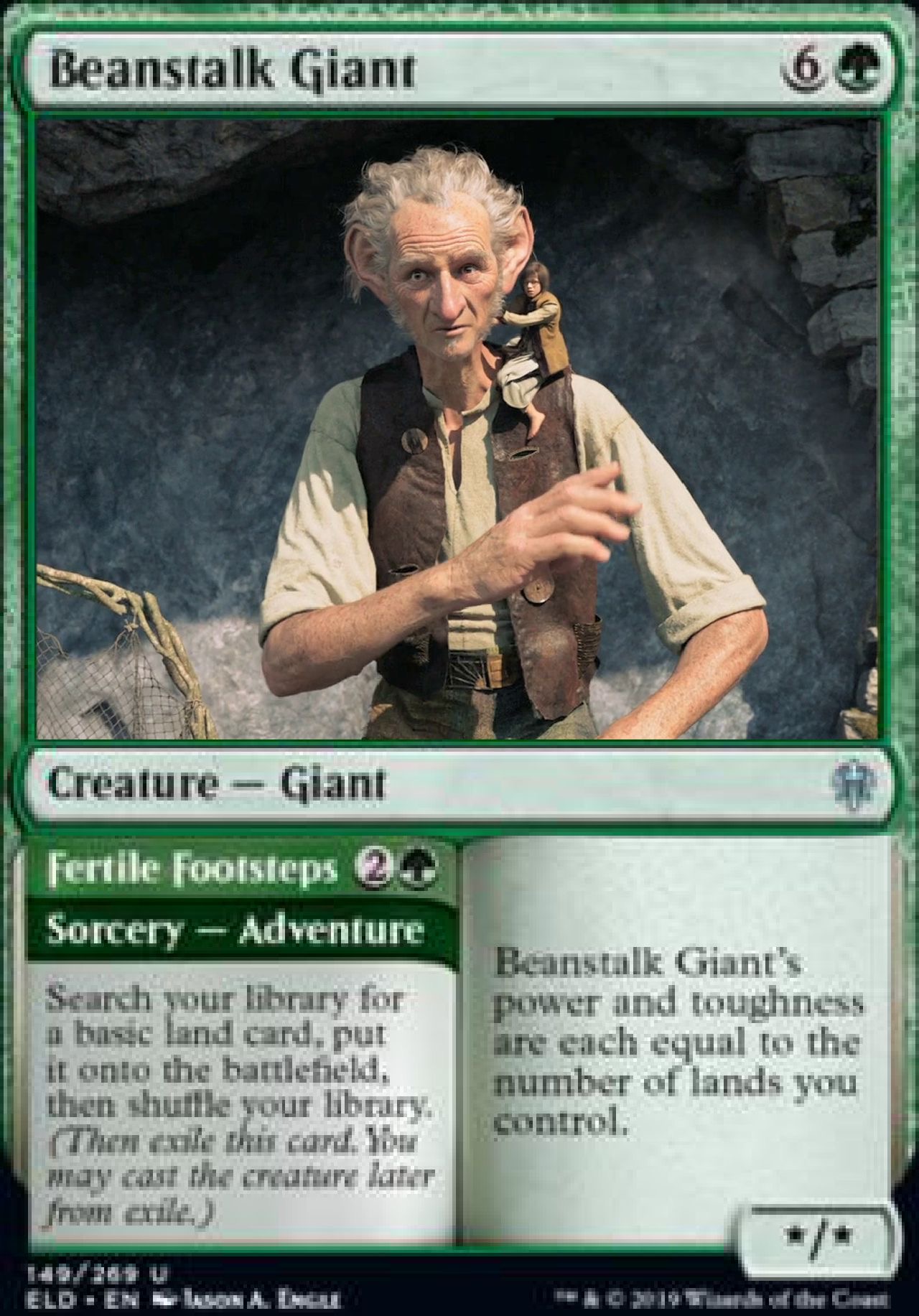 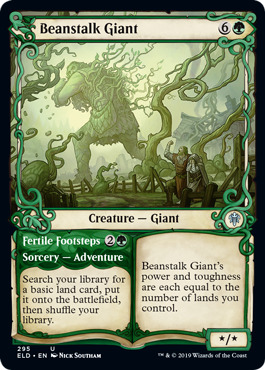 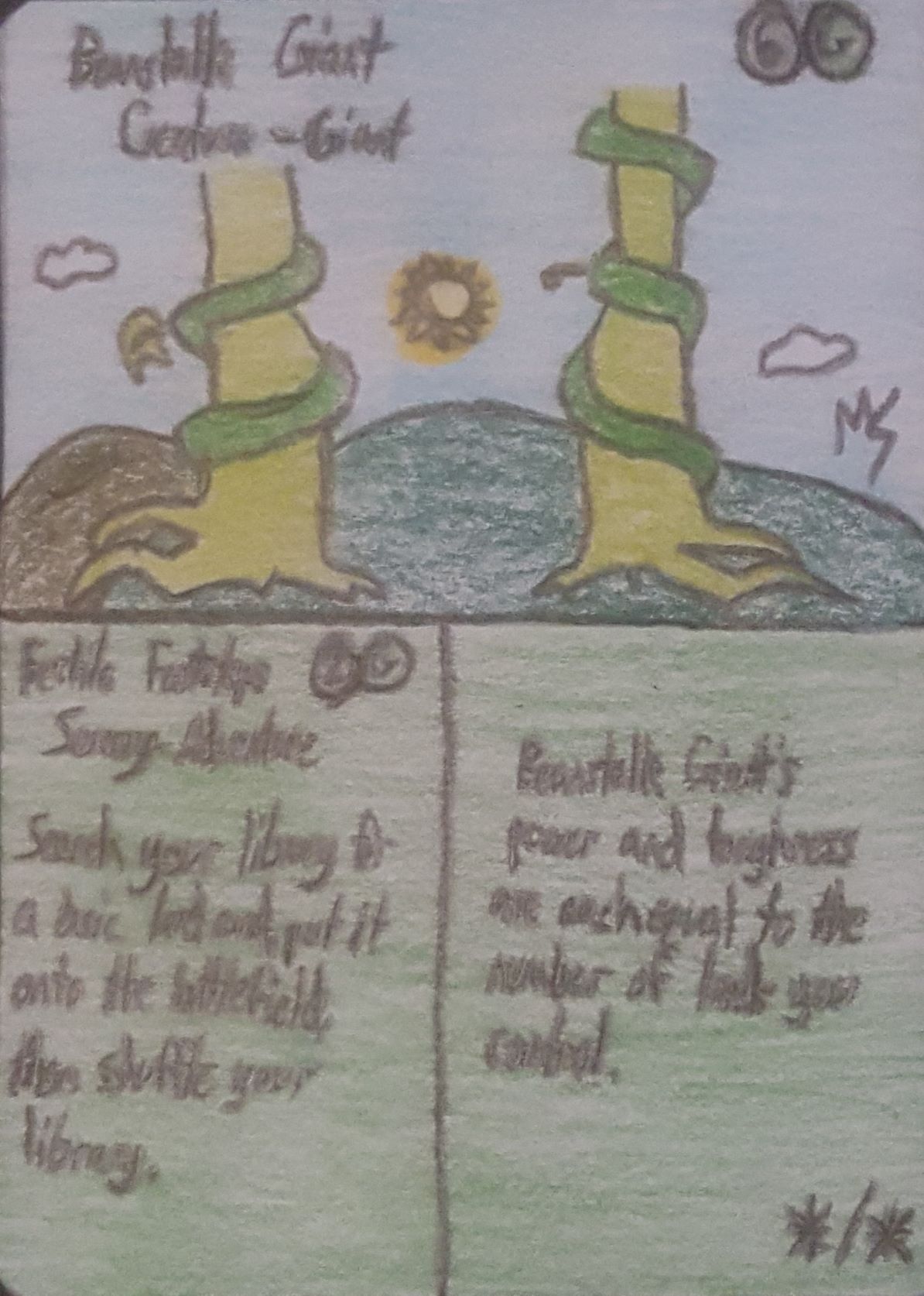