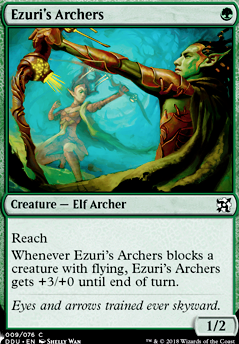 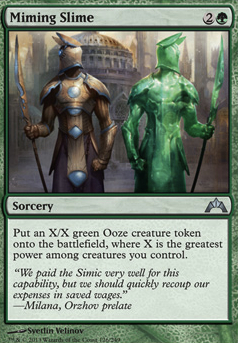 Fun With Wellwisher
by fishpoop11 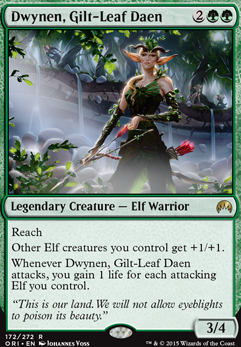 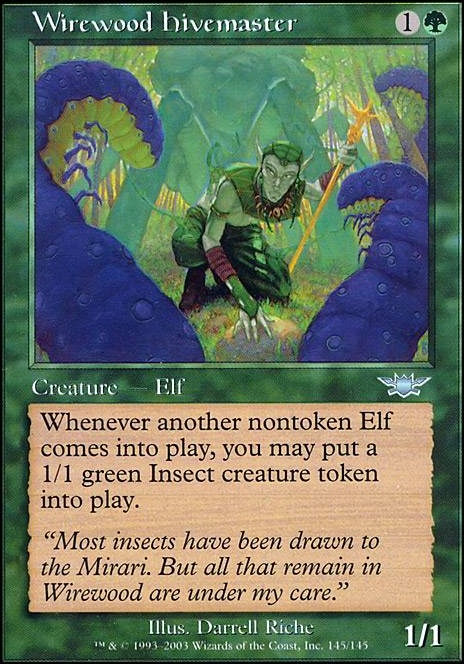 Sounds a tad bit like the infamous bogles deck, personally id remove a few of the ramp creatures and add a few lands as to help prevent getting mana screwed as only having 15 lands can really goof ya up, Id also suggest cutting the Ezuri's Archers unless you're dead set on that being in the final version as it isn't the strongest card, unless of course this was made purely for fun, then carry on my man!

Scattershot Archer is the common pauper green hate card for flyers rather than Ezuri's Archers. you might want to consider him for your sideboard.

what about Uncage the Menagerie? its cheap and can fetch out both of your combo pieces since they both cost 2. I would maybe cut Aven Skirmisher for llanowar elves to help ramp up to your combo sooner. you could also cut Ezuri's Archers for Duskwatch Recruiter  Flip as another way to dig for your combo and once you get infinite mana you could use it to draw all the creatures in your deck.

Well since you are new i can kinda understand some things now (no offense :c)

first thing above all else. you need 60 cards in a deck. not over. Otherwise you already are in bad shape. Don't worry though when i started playing I had an eldrazi standard deck back in oath of the gatewatch being released. It had i think 79 cards in it with like 30 something lands. was very bad XD. It had good cards but it just was never consistent so finally my friend sat down with me and we trimmed it down to 60 and it became much more smoother and I started winning fnm shortly after :p.

So for getting down to 60, I would suggest you cut the elvish abberation because it just wont have as much use in modern as other things. Lich's Mirror is just a terrible card. All it should say is "you have 1 more turn to play a land and die". Since it wont reset opponent at all it will just draw it out for 1 more turn and waste time. Helix Pinnacle should go as well. unless you find a way to go infinite with mana, get rid of it. Cause it will probably take more than 10 turns to actually win if your lucky and modern games usually end at about turn 9 or before. Immaculate Magistrate is a good card but it shouldn't be used in modern. If your gonna play something like elves, you want multiple explosive creatures and not 1 big creature. Engulfing Slagwurm seems like a dead card for an elf deck. It has no other synergies with your other cards and its not an elf.

Sorry If I sound a little rude I know it sucks having someone say to take a bunch of cards out but trust me it will help big time.

So now that we are back to 60 cards, lets go over another thing that new players don't catch on to usually. If you want to have a good consistent deck, you will want to have 4 of and 3 of with cards so you can get the most out of it and be confident to play with it. Unless it is a legendary card then it just depends.

I would suggest getting rid of the other Engulfing Slagwurm and Ezuri's Archers. There are not a lot of flyers in todays modern meta unless you go up against like a jeskai aggro deck or something which is not that often.

Let us also get rid of the Coat of Arms and Door of Destinies. Even though it seems like a bad idea, if you really think about it then the cards are gonna be worthless. for instance, Coat of Arms is a good card, but what if you went up against goblins? or merfolk? or humans? or slivers? or allies? See where im getting at now? and with Door of Destinies by the time you cast it you will probably have all your elves cast or at least the majority of them.

Let us also get rid of 3 of the Elvish Promenade. I say keep 1 because it could still be useful in an elf deck, just not as a 4 of cause it won't win you the game. However it is a great utility. I would cast this as late as possible without having it be a dead card so you can get the most out of it. Or possibly more ramp for Elvish Archdruid. I would also get rid of Imperious Perfect and Lys Alana Huntmaster

So in total that takes out 14 cards, now lets fill it back in. 1 more of the Elvish Archdruid is a good start, having 3 is a strong way to ramp. 1 of each Elvish Mystic Llanowar Elves. Now lets add some cards. Dwynen's Elite is probably one of the most strong elf cards so I would strongly recommend get a 4 of and get 4 of Elvish Visionary. the visionary is another strong card considering how much mana elves get its basically a free 1/1 that draws :p. Nettle Sentinel is another great card so would get 3 of those. And with all that you should have a much more consistent (and better version) of elves.

Now later on if you get the money, I would also get some expensive stuff like Cavern of Souls, Verdant Catacombs and Wooded Foothills to thin out your lands so you can draw more of spells instead of lands. I would also swap out your Naya Soulbeast and Worldspine Wurm for 2 Craterhoof Behemoth because that is just game ending in elves. Would also get rid of the 2 Genesis Wave for 2 Chord of Calling. But this is when you get the money. Would also get some creatures like Heritage Druid and Ezuri, Renegade Leader

I hope this information will help you annihilate opponents and win all the FNM matches :D. If you want to see my version of elves I will post it down below. I decided to go golgari colors instead of mono green however but the basic things I told you here is also in there so you can see how it works out.