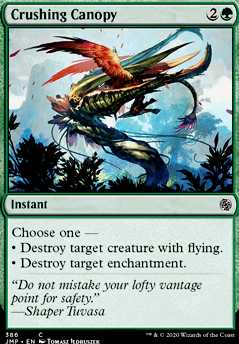 Crushing Canopy occurrence in decks from the last year 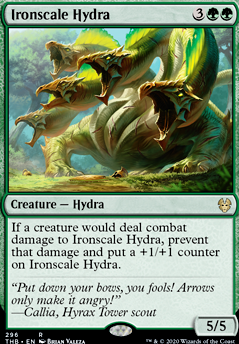 Thorn Elemental Swings Through
by Brynx 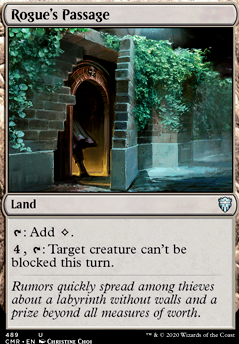 Also remember that in War of the Spark, they have already spoiled Teyo, the Shieldmage . Makes 2 walls for and gives you hexproof. So, pretty good in this deck! I love this deck and have been playing it since the beginning of Allegiance. It's just so much fun to mess with people. They usually think you're new to the game haha. "Look at this scrub playing defenders..." When those same people lose, they always look like they have to re-evaluate their life choices.

Murphy, Arcades is your win condition and both of your win conditions (Arcades and High Alert) are easily removed right now. Vivien Reid , Crushing Canopy , Mortify , etc. And as a draw engine and win con, arcades draws removal. It hurts to have one in hand and another on the field but since he's 5 power and legendary, generally your opponents have to expend a lot of resources to kill him. When he gets killed, it feels awesome to immediately play him on your next turn. I run 4 in my deck. If you only run 3, then the odds of hitting him with Adventurous Impulse go down dramatically and now your method of getting to your win con quickly is far less effective since it doesn't hit High Alert.

The other thing I would say would be to swap Snubhorn Sentry to Resolute Watchdog . Able to block very favorably from turn 1 and his effect allows you protect Arcades for . This little dog has saved Arcades more than I am willing to admit.

Thanks for the feedback djnewellmit,

Yes, at the moment the combination of Reclamation Sage , Tower Defense and Vivien Reid does the trick. I am sure that at some stage I will find another card that I really want in the side-board, which will most likely mean replacing 2 of the above with Crushing Canopy . At this point in time I find Tower Defense to be more versatile than Sagittars' Volley and it is cheaper to cast. I suppose that if 1/1 token creature decks become popular again then Sagittars' Volley becomes a must.

I see that you're already looking at the spoilers for WAR. I'm very excited about the proliferate elves.

Another sideboard option I'd suggest is Crushing Canopy . I see you have Tower Defense to play against flyers (and possibly save against a Deafening Clarion ). Canopy gives you an answer to flying threats, while also giving you another answer against problematic enchantments. My Canopy has proven useful especially against many white (mono-white, WB, Jeskai) decks that to bring in Lyra Dawnbringer and Ixalan's Binding from the sideboard. However, you may find that Canopy is too redundant with Reclamation Sage and Vivien Reid . I've even considered Sagittars' Volley , especially if anyone in your meta is running a WB afterlife/spirits deck.

1119Jace_Beleren, I see that you have very clear the cards that you are going to put in the sideboard. My additional suggestions for the sideboard are 2 Murmuring Mystic , 2 Biogenic Ooze , 2 Rekindling Phoenix , and 2 or 3 Crushing Canopy .

I hope that helps you!