Shadow of the Grave

Return to your hand all cards in your graveyard that you cycled or discarded this turn.

Anje Rummage All!!!
by herenews

Cooking by the Book
by cadetheespeon 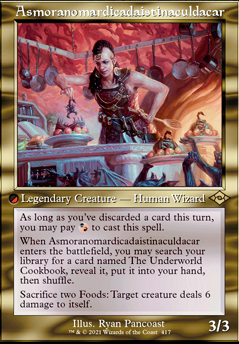 Shadow of the Grave Discussion

seshiro_of_the_orochi thank you for the advice!

Originally, I had planned to have Nekusar, the Mindrazer as my commander, but then I accidentally found Kess, Dissident Mage on www.scryfall.com lol, and completely changed my theme to a wheel+spellslinger combo deck, which works really well when you can re-cast cards like Shadow of the Grave

I do like Underworld Dreams , however, it is more of a pick your poison if I have Hullbreacher out. My original questionable idea with Furnace of Rath was that it works very well with Guttersnipe , Cruel Ultimatum or in general any attack.

I could agree with everything else, and don't even know if I will throw in a Fiery Emancipation or Furnace of Rath . I do not own this deck yet, I actually printed this entire thing out about a week ago and had some of the cards, but plan to slowly buy the cards for it replacing the proxies. Thank You again!

P.a. I just noticed that Shadow of the Grave thatâs some spicy secret sauce youâve got there, I may take that for use in my own build now. Works real well with Ill-Gotten Gains and Dark Deal

Thanks for your suggestions abby315 & seshiro_of_the_orochi.

Transmute really has one of the strongest synergies with Ramirez; however, I didn't end up adding it for each CMC, because the deck is still in construction and I don't have key cards to tutor for yet. Also, I want to make sure that the card with transmute has a relevant ability. Otherwise, it'll only be a tutor and a waste of a card slot, imo.

I haven't thought of Dredge cards. Thanks for that suggestion! I think cards with that ability might work best when I have both commanders in play. (probably cutting some cycling cards for Dredge) These are the ones I'm currently considering: Golgari Thug, Necroplasm and Dakmor Salvage. I think I need more cards that recur stuff from my graveyard besides Ramirez. (just in case he gets removed before combat dmg etc.)

Also looking for cards that synergize well with my commanders and help me recur non-artifact, non-creature cards.

Dakmor Salvage can put cards into your graveyard and can basically draw you cards with Ramirez. The same goes for Contingency Plan. Also, how about Oblivion Crown for additional commander damage with Ramirez? Finally, Shadow of the Grave seems really powerful.

RambIe on Help me foolproof this infinite â¦

I would know my own deck so lets say I'm running my casual template of 30 lands, 25 creatures, 20 instants, 10 artifacts, 10 sorcery, and 5 enchantments

so step one i would play the combo out normally announcing non land as my replacement so that everyone could see how it works and give everyone a chance to respond
i would then announce that i am going to repeat this process 29 more times to create a total of 30 1/1 tokens
i would then reveal 58 non land cards through the deck, choose 3 to hand and discard 58 cards
at this point in time i would have a potential of 60 colorless mana and my choice of any 3 cards from my deck
my first choice would be to cast Shadow of the Grave
what happens next would depend on the deck but if that spell resolves i can promise its game