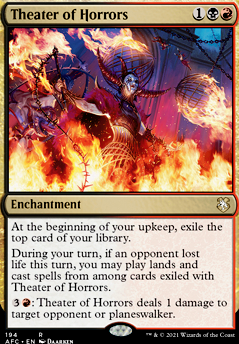 At the beginning of your upkeep, exile the top card of your library.

During your turn, if an opponent lost life this turn, you may play cards exiled with this.

: This deals 1 damage to target opponent or planeswalker.

Live long and Prosper
by death_puppit18

I want all the treasures
by Lestat85

I recommend Theater of Horrors for some card draw effects. Something like Faithless Looting wouldnât be bad in here.

I have an edgar build. Most believe it doesnât take much to pilot vamps to a W, but truth be told it requires a lot of planning. For that reason, Iâd recommend lowering your curve wherever possible.

Indulgent Aristocrat , Knight of the Ebon Legion , and/or Vampire Cutthroat (Skulk is underrated). These are some vamps that will push damage earlier.

Hi Kebes,Curse of the Pierced Heart in combo with Theater of Horrors?

Rivenor Always love more options, thanks for the suggestions. Theater of Horrors is something I've never thought about, neat that it can stack a bunch of cards.

if your dropped Theater of Horrorsyou could run Lurrus of the Dream-Den as a companion. Zulaport Cutthroat is also probably worth a look and Mogg War Marshal can do alot of work Serrated Scorpion is pretty much strictly better that tattered mummy

Grim Haruspex is better than theater of horrors 9/10 time