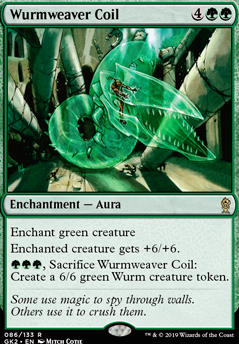 Oh I definitely like Sundering Growth and Rootborn Defenses - those are great includes. I also like Second Harvest and Wurmweaver Coil . Definitely something to consider...

As much as I love Roar of the Wurm it does feel redundant with Crush of Wurms . Yes, it's cheaper, but if I'm spending all that mana on a sorcery, I may as well get 3 for 1, right?

The vanilla wurms are in there for curve and for things like Descendants' Path , and just so I don't get knocked around before I can come online. Wurms are not fast lol. Ideally, there would be better cheaper wurms, but most good wurms start at 6 cmc.

Thanks a bunch for the suggestions! I will definitely pick some of those up on my next order.

Seeing the deck laid out, a couple of things come to mind. â These cards fit with the Wurm + Token Theme . Symbiotic Wurm (not wurm tokens, but still a good boy.) Roar of the Wurm Wurmweaver Coil Second Harvest

â Treat things that generate Token Wurms as functional "creatures". That way, you don't have to slot in vanilla wurms, and can instead run a few more populate cards, or token mechanic cards.

â On Populate, easy replacement could be swapping Naturalize with Sundering Growth

â Predator's Rapport ... in your BEST case scenario, 30 life isn't anything to sneeze at. HOWEVER: if you aren't building around life-gain, it's not a great card on its own. Try Rootborn Defenses , which is super versatile on offense and on defense, and grows your army.

Flameshadow Conjuring. double your pleasure double your fun ! also if wanna do this and break it stupidly, Parallel Lives that with the other token makers can be awesome. Wurmweaver Coil

If you're having trouble finding room for Panharmonicon I would take out Wurmweaver Coil. I think if you want to increase her power there are equipments that would be better.

I'd recommend Warstorm Surge over Where Ancients Tread. It's 1 more mana, but lets your small creatures deal damage as well, while allowing your larger creatures the ability to deal even more damage. Additionally, it's the creature dealing damage instead of the enchantment, which could matter if you have lifelink or deathtouch or something. For that matter: True Conviction over Wurmweaver Coil seems good, since it makes your wurms even more dangerous.

So if I use Wurmweaver Coil's ability and it goes on the stack, I could use a Wrath of God and then I would get the token after it resolves?