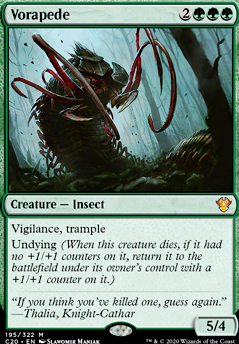 Vorapede occurrence in decks from the last year

I Solemnly swear I'm up to no good
by WaveRave

Mutant And Proud
by PastaBoi 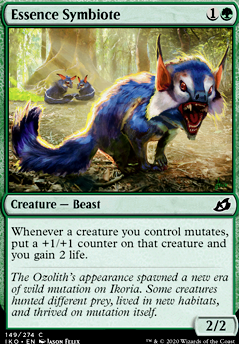 Glad you like it! Unfortunately, Vorapede costs too much at five mana, especially when this deck really likes leaving up at least one mana for various spells.

Cards like Yawgmoth, Thran Physician and Geralf's Messenger, though very good, are pretty expencive to the deck as well. makes me wish there was another good undying creature and sac outlet at one or two mana. That would really put the deck over the top in my opinion.

I've always liked Vorapede, but is it too high cmc for this deck?

Affinity_for_MTG on how to deal with people â¦

Cards that generate value/card advantage are also great against black control. Take Thragtusk for example. You gain 5 life even if it's killed immediately, and then if they kill it you still get a token, so they have to use 2 cards to get rid of your 1 creature, and you still net the 5 life. Anything that takes multiple cards to destroy is what you want to look into, or cards that let you draw a card or 2 before they die.

If you're friend has to use 2 kill cards every time they try to get rid of one of your creatures, then you'll eventually you'll have more creatures than they have control spells.